Growing up in Louisa – Landmarks!

I have read the following verse many times over the years, but since I’m not in the demolition business, I had not personalized the biblical quote in Proverbs 22:28, (KJV) “Remove not the ancient landmark, which thy fathers have set.” I know the reasoning behind this is so that God’s people will see and remember the struggles and victories of the past. They serve as signs to each generation and reinforce the stories meant to be told by word of mouth. They help to explain who we are as a people. Whether it is a pile of rocks, or the remains of a temple, those instructions makes sense.

Coming from a small town in eastern Kentucky, I am left wondering what monuments, or landmarks, we may have destroyed, or for that matter, have either passively, or intentionally, elected to save. The question is what things we ought to preserve for posterity. Take for example, the pile of stones Joshua was instructed to build when he crossed the Jordan River into the promised land. Those stones were to be permanently left to remind all generations of the crossover event.

When I think of ‘landmarks’ a few buildings, geographic features, and structures pop into my mind. The practical problem is that buildings, even if a salient feature of a community, grow old and by nature will one way or another disappear from the landscape. Surely some things that we intentionally designed and built as a memorial should be preserved. I’m thinking things like the Washington Monument, National Capital, the White House, and the Jefferson and Lincoln Memorials. But what, did I see as landmarks when I was growing up?

We laugh about the silly tales of a farmer who gave directions to a lost traveler: “Go a mile or so down to the Bussy barn and turn left on Leaf Branch Road. That will take you over the hill to the holler, which has a road going both ways. Turn on that and go past the widow Cyrus’s place and take the foot bridge over the creek. You’ll soon enough come to Boydville Station. From there take the train. The conductor will tell you when it’s time to get off.” The problem is that the features are obvious and well known to the farmer, but are less understood by the traveler. Even with the directions you might find that you can’t get there from where you are.

My experience with GPS systems aren’t always that good, either. We hear stories of folks who were led to a swamp or otherwise off the beaten path. I’m reminded of the common advice relating to our famous bridge. People who live on the ‘point,’ like my friend Bernard, Bill and Larlene Lemaster, and Kay Maynard, have likely told many visitors to take the bridge, and when they get halfway across, they should turn right. That old bridge was a landmark to me. I crossed it many times, often walking to Fort Gay for baseball or to buy some Verner’s Ginger Ale. No doubt the steel grid and wooden walkway needed the updating users now enjoy. I thought it was spooky to look down into those swift waters. Thanks to a few dedicated citizens the old bridge was replaced with a much better, more modern, and safer structure.

When I was growing up, a landmark might have been a mere rock overhang, or a certain curve in the road, or maybe a swinging bridge. Coming around a curve and seeing an expected valley meant that we were almost at our destination. My contemporaries will know some of those features, but others are lost already to the newer generations. We no longer even travel the same roads since the main highway going north was moved to parallel the river.

Shutting my eyes, I can recall many things that were and that simply are no more. For one reason, or another, they no longer exist. Take the old ‘KY normal college’ that was at the southern end of Main Cross. A number of generations called that their high school, including my mother and me. Shortly after I left town this building was razed and replaced by a more modern structure. The town benefited by the change, but we who walked those broad hallways were left to mourn the loss. I remember the old supply mill that sat next to the railroad tracks at Perry Street. Fire claimed this dusty building, I’m told, but I’m not surprised. Flour dust is explosive and had to be at least a catalyst once the fire started. Just north along the tracks the old armory of my mom’s day is gone, too. My mother would remember that better than me, although I did explore the building in my younger days. During the war, many a soldier and young lady danced the evenings away to songs such as the Andrews sisters singing “Don’t sit under the apple tree.” When I sneaked in to see this one it was very dangerous. The stairways were leaning and ready to fall.

I recall that century old church sitting on town square. It stood at the center of the main intersection downtown. I spent many days and evenings at church, choir practice, social events, and Sunday school. The congregation moved to a modern building between town hill and pine hill. The church of old was abandoned and boarded up when I last visited the town.

Town hill itself is cut up by new roads, but I remember the times I walked the dirt road next to the town dump, (which is now a shopping center), and on to a fork near the top. The roadway that might have taken me further uphill to the old fort bishop ruins, is private and has been blocked. The other route I used to ascend and descend the hill was on its face. I would start at the old grade school and climb. Now the new road dissects that path with steep cuts. The old “Mayo Trail” that led out to the Pannell’s Pontiac, the skating rink, the Flattop Inn, the waterworks, and on out to High Bottom, remains, but is secondary to the higher road now commonly traveled.

There used to be a stockyard at the northern end of Clay Street that was busy with cattle and their buyers and sellers. I remember the Van Hoose Lumber Company run by Teenie’s dad, and across from the Curtis Young’s grocery store on Pike and Clay.

Everyone from that day will remember the famous depot which was so long a landmark. Sadly, it burned along with several other buildings including two grocery stores, food locker, shoe shop, and the barber shop I often visited when forced. The virtual gateway to downtown was destroyed, and more sadly, a life was lost.

The downtown that I remember as a bustling business venue is pretty much a ghost town. Some newer businesses have a foothold, but they are not the money-makers I remember from back in the day. The flower shop, Western Auto, the Garden Theater, Carter’s Department Store, the Rexall Drug Store, the bank, the Favorite five and dime, and others are all closed. Many buildings that once held busy retail establishments have other uses today. Some appear to be empty or abandoned.

The downtown area was a victim of the big box stores and the two by-passes that insured traffic would no longer pass through the downtown. The big fire on Madison took its toll, but some businesses were already having trouble staying on the black side of the ledger. Private charge accounts established long before plastic was being used, forced merchants to personally carry debt. The charge cards of today might have helped if they were around. Cash was hard to come by as the coal business plunged and even the railroad was forced to reduce services. The largest payroll in the county was paid out by the school board, but those were often less than poverty rates. Teachers took ‘payday’ loans out more and more often to pay for the essentials of living. 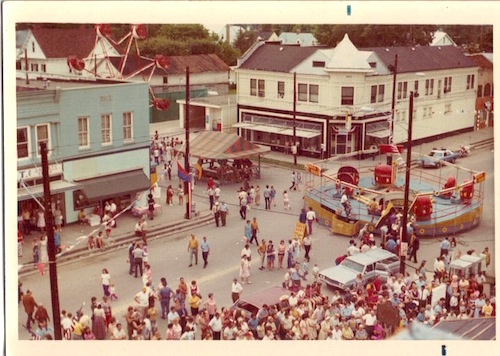 The ‘Needle Dam and Locks’ were first surveyed by a young George Washington, and are an important remaining landmark. For years, only the ghostly pillars of the dam crossed the river. The needle structures were either missing or broken. Just after I left town they were repaired and once again the river became viable for river travel.

Many of the stately or cute homes in town and a few of the businesses still stand. Simpson’s Gulf is still there as is the Tasty Freeze. The Cypress Inn remains, even if it has changed character, and so does the post office. Dee’s Drive In is there (I stopped by and ate lunch not too long ago). The house I lived in is radically remodeled, but is still standing, as are the houses once owned by my neighbors. The newer of the old HS buildings also still stands. The townspeople enjoyed many football games and basketball games there in those days.

At least in my mind, landmarks are not merely the convergence of the river forks, or town hill, or even pine hill. There are few things ‘set’ by our fathers in memorial. One would be the monument set for Chief Justice Fred M. Vinson, the historical markers (if any), and the older houses or buildings sprinkled about town.

All of this nostalgic writing may make it seem as if I am in disfavor of ‘change.’ Not true. I’ve pretty much always been a proponent of progress, but with a caution that not everything new is necessarily progressive. There’s certainly a place to improve our lot(s) in life and we should be about doing just that. I dream for a change that would come and embrace the past, such as a redevelopment effort to restore and improve downtown. Parks, theaters, stores, restaurants, and even condos, or apartments over storefronts might bring the town back to the days when neighbor knew neighbor and a walk with the kids was the order of the day. Keep, or duplicate the landmarks, maintain the small-town feeling. Then enjoy the new landmarks even as my peers enjoyed those of our time when we were ‘growing up.’

Maybe this new millennium is an opportunity to clean up the quaint little town and add parks, paths, fountains, and give new birth to a town that deserves another chance. I’m hoping to see that develop for newer generations to remember as ‘home.’

DRIVE 4 UR SCHOOL EVENT TO BE HOSTED BY LCHS BAND