Federal Court now has only one female out of 13 in Ky.; two more may be coming soon 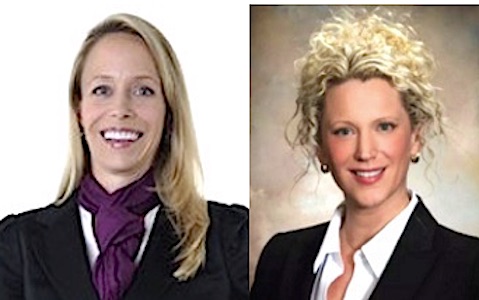 Kentucky may be getting two new federal judges, both of them women.

Several lawyers said they have been interviewed by FBI agents performing a background check on Claria Horn Boom, a former federal prosecutor who is now a partner in Frost Brown Todd’s Lexington office.

Caroline Pitt Clark, director of governmental affairs at LG & E/KU Energy, is also a possible nominee for another federal district judgeship, Above the Law, a legal blog, reported Monday.

Only one of the 13 active and senior federal district judges in Kentucky is a woman.

Boom, 48, is being considered for a swing seat formerly held by Judge Jennifer Coffman, who heard cases in the Eastern and Western districts of Kentucky before she retired in 2013, according to Louisville attorney Kent Wicker, who said he was interviewed in early April about her by the FBI.

Wicker, who supervised Boom when she was an assistant U.S. attorney in Louisville and tried cases with her, said she grew up in a Republican family – her mother was county clerk in Martin County – and that she is a “moderate conservative” and “not an ideologue.”

“She is a fantastic lawyer and a great choice,” Wicker said.

Clark, 40, who is a former administrative law judge in the state Office of Workers’ Claims, would succeed Judge John G. Heyburn II, who took senior status in 2014 and died the next year. Clark is the daughter of Gov. Matt Bevin’s general counsel, Steve Pitt, and was a former member of the Public Service Commission.

Louisville attorney Dell Levy, a Democrat who practiced before Clark when she was an administrative judge, said she had little experience in workers’ compensation when she was appointed but learned quickly, worked hard and became a highly regarded judge.

Boom and Clark, who are both Republicans, would have to be nominated by President Donald Trump and confirmed by the Senate. District court nominees are generally recommended by senators of the president’s party. Spokesmen for Sens. Rand Paul and Paul Mitch McConnell declined to comment.

Boom, who then went by the name Claria Horn Shadwick, was the first executive director of Kentucky Equine Education Project, which was founded in 2005 to promote and lobby for the horse industry.

At Frost Brown Todd, she represents clients in banking, finance and commercial transactions, as well as internal investigations.

She is a former member of the board of trustees at Transylvania University, from which she graduated in 1991. She also graduated from Vanderbilt Law School.

Boom is married to Denny Boom, president of a Lexington construction company. Clark’s spouse is Justin Clark, general counsel for the Cabinet for Health and Family Services.

Clark graduated from Centre College with a bachelor’s degree in political science and got her law degree from the University of Kentucky.

She was appointed to the Public Service Commission by Gov. Ernie Fletcher and as an administrative law judge by Gov. Steve Beshear.

By Andrew Wolfson
The Courier-Journal