A MYSTERY: UNIDENTIFIED MAN SERIOUSLY INJURED AFTER FALLING OVER A HILLSIDE HIGH WALL IN LOUISA;  MAN WAS RUNNING ON FOOT FROM LAW ENFORCEMENT 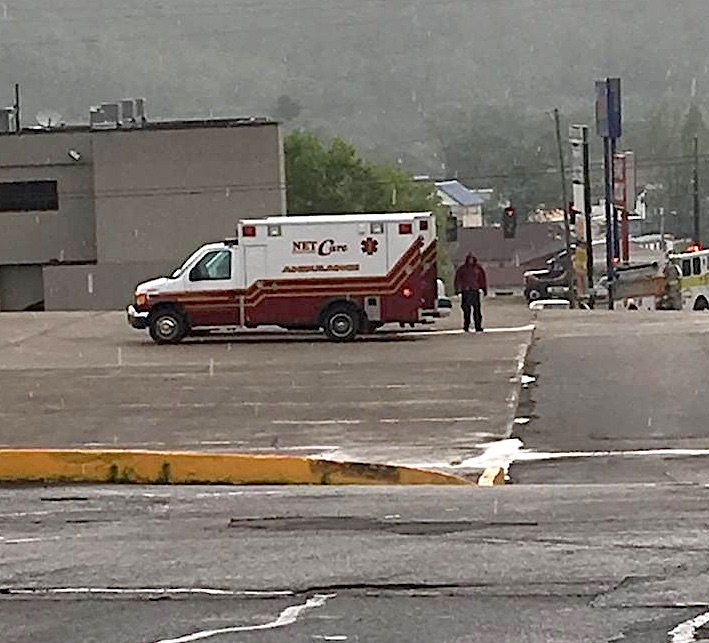 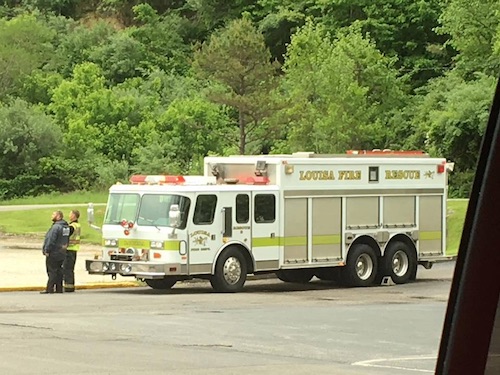 PICTURES SHOWING LOUISA FIRE DEPARTMENT AT AROUND 2 P.M. SATURDAY, MAY 6, BLOCKING OF THE LOUISA PLAZA, TO SET UP A LANDING ZONE FOR AIR AMBULANCE HELICOPTER, TO TRANSPORT VIA NETCARE LAWRENCE COUNTY, OF A MAN INJURED WHEN HE FELL OVER A ROAD HIGHWAY OFF OLD 23 IN LOUISA. HE WAS FLOWN TO TRAUMA CENTER IN HUNTINGTON

On the afternoon of Saturday, May 6, 2017 a mystery incident happened in Louisa, involving a male individual who apparently fell, or jumped, over an extremely steep hillside highwall in the Louisa area.

Just after 1:00 P.M., Lawrence County E-911 received a call of a male subject who had been seen plummeting over the highwall hillside near Quality Drive lane in the High-bottom area of Louisa.

The highwall is located off the guardrail near the entrance of the roadway that starts by the curve near New World Video, then on old Old 23, that goes on down to Dead Man’s Curve.

While the high wall is not a straight drop, it is pretty close to it, and at its top point, going down the steep enclave is well over a hundred feet.

After receiving the call Lawrence E-911 dispatched the Louisa Fire Department and Netcare Ambulance Lawrence County to respond to the scene. Fire and emergency personnel found the subject at the bottom area of the high wall, where they determined he had suffered multiple serious injuries.

Emergency officials immediately made a call for an aeromedical ambulance helicopter to fly to the area, where emergency officials had the helicopter to land at a landing zone set by the fire department the Louisa Plaza on the other side of Tower Hill just a couple hundred yards from where the injured man was lying even though there is a permanent landing zone at Three Rivers Medical Center only a mile away.  Due to severity of the the man’s injuries officials wanted to save the seconds to him transported by airborne to a hospital in Huntington, West Virginia.

The man was transported to the Louisa Plaza and placed on the air ambulance and flown about an hour after he was located by emergency first respondents.

Lawrence County Sheriff’s Deputy Mark Wheeler, who is in charge of the investigation, could not be reached this morning for police report. City Police Chief Greg Fugitt said Monday morning that his department was not involved.

The LCSO has not yet released the name of the subject, or the bizarre circumstance was that led to the man falling over the high wall.

Via The Lazer’s police scanner an unknown sheriff’s deputy (or deputies) was chasing the man on foot or via police cruiser(s) when he saw the man go over. “I’ve got him, send backup,” the policeman was heard to say over scanner radio. “Wait, he just went over the hill. He is down in the creek,” the officer relayed.

The entire communication was played out on the scanner until the rescue was complete including the decision of LVFD chief Eddie Preston to have the copter get in closer to the scene because of the terrain and situation.

The Levisa Lazer will be continuing to monitor the situation of this unusual incident, and will provide more information as it becomes available.

CAUSE OF SAW MILL FIRE IN NORTHERN LAWRENCE CO. A MYSTERY