Louisa, Ky. — Austin Roe hit his first high school home run and Lawrence Co. (15-6) got back to back complete games on Saturday afternoon to take care of Powell Co. 8-2 and Fleming Co. 5-0 on a hot and humid day at the ballpark. 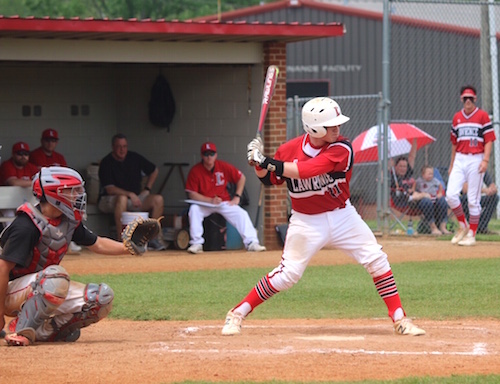 In the first game of the day Kade Sword went seven innings on the mound to pick up the win. Sword gave up six hits and struck out five Pirates, but the most important stat was he only walked one batter.

Jackson Feltner went 4-4 and knocked in two to pace the offense, Austin Roe hit a solo shot, CJ Fairchild doubled, scored a run and had one RBI, Trace Bowen doubled and scored twice, Tyler Maynard had one hit and one RBI, Blake Jordan, Dakota Shortridge and Bryce Blevins all had one hit, Lucas Maynard scored two runs.

Sophomore Lucas Maynard threw a complete game shut out to pick up his first career win. Maynard allowed four hits and one walk, while striking out 2 Panthers. 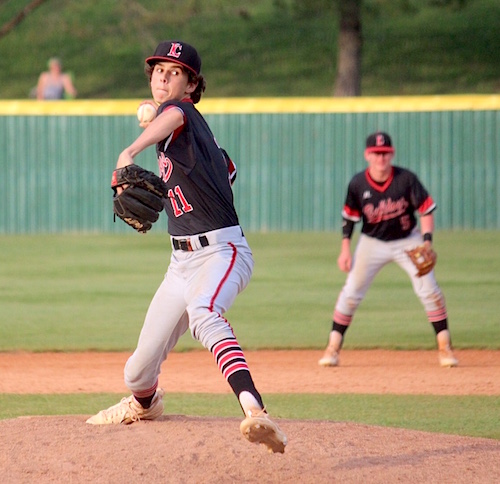 Austin Roe continued his hot hitting with base knocks and a run batted in, Brad Parks had a hit and scored three times, Jackson Feltner had a hit and knocked in two, CJ Fairchild had 2 RBIs, Sam Collinsworth scored twice and Tyler Maynard once.

Lawrence Co. will be back on the road three times this week with only one home game mixed in.

On Tuesday the Dawgs will travel to Olive Hill to face West Carter, they will Host Wayne, W. Va. on Wednesday night, travel to Logan, W. Va. on Thursday night and to Vanceburg to face Lewis Co. on Friday night.

“… Today was a great day. We played solid defense and gave our pitchers a great chance to go out and win both games. It definitely helps when they can throw complete games.”

” It was the first pitch I saw from the pitcher, about belt high and inside. I just went out and got it. At first, it looked like it was going to be a foul ball, so It felt good to watch it go over while in fair territory.”

“… Two good efforts on the mound and we needed both of them to go deep into the game and both Kade Sword and Lucas Maynard did just that.” It was a warm day for everybody and both guys pitched well.” Our defense was a little shaky in game one but we got enough hitting to overcome it. Austin Roe and Jackson Feltner both hit it well.” Went 4-1 this week and had chances to win the West Carter game. We have overcame some injuries and adversity and to be 15-6 says a lot about our kids.”