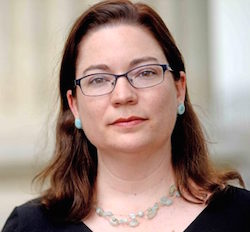 Kentucky Coffeetree Cafe co-owner, progressive and former Democratic National Convention delegate Mary Nishimuta plans to build a bridge between experienced party faithfuls and energized newcomers from the last presidential election as the next executive director of the Kentucky Democratic Party.

Over the years, the cafe has hosted events for the exchange of ideas and discourse. Before the 2016 presidential election, Nishimuta worked within the groundswell of grassroots organizers and progressives in support of U.S. Sen. Bernie Sanders. During the Democratic National Convention, she served as a delegate and on the rules committee, and after Election Night, Nishimuta organized OneFrankfort to bring unity to the capital community not based on partisan ideologies but everyday issues.

Nishimuta and her husband Walt Baldwin have owned the cafe for nine years. She’s an industrial and systems engineer graduate from Georgia Tech. Professionally, Nishimuta has more than 20 years of management experience with design and creation of supply chain management systems for Fortune 500 companies.

Staying issue-driven, Nishimuta plans to steer clear of the 24-hour news cycle partisan tit-for-tat noise and instead talk openly with Kentuckians in all 120 counties about the issues affecting them.

“That proven history of bringing people to the table having open, honest dialogue about either how to fix problems or move forward or unite for a common purpose is the skillset that is critical for the Kentucky Democratic Party,” Nishimuta said. “Our goal in the Kentucky Democratic Party is always to fight for working families in Kentucky. What it means is I hope we break down a lot of that negative dialogue and actually make it real for people again.”

In rural Kentucky, where working two jobs is essential to paying a mortgage or covering rising health-care costs, Nishimuta said those Kentuckians have been left behind, and continuing to perpetuate political ticktack is dishonest and ineffective.

“We have to rally for those people that have been left behind. We need to break down that messaging and make it approachable to folks who are just looking at their bills at the end of the month and looking at the amount of money coming in and those two don’t match,” Nishimuta said. “I think that is where the people have spoken, and that is something I hear very loudly and very clearly almost every day — people are fed up with the back and forth. People need to know what it is that will fix their situation.”

As an outsider, Nishimuta has worked with people from many different political backgrounds and political groups. With that understanding, she said she will use it as strength to unify those both politically active and those politically disenfranchised with the party. The way to reach those who haven’t been politically engaged in the past — independent voters, millennials, new voters — “is by honestly talking about the things that matter to them.”

“They say the Democratic Party is a big-tent party, and that couldn’t be truer. There are folks from every walk of life that find their home in the Democratic Party because at the very base of it, we are all empathetic and we all realize that we have to fight for the rights of the people,” Nishimuta said. “We all will recognize that the Republican mechanism is just usurping money from the working families and giving it to the top 1 percent.

“The fact that I am an outsider, I’ve worked with a lot of the political activist folks and also with my recent work here with the Kentucky Democratic Party, I have a lot of respect for the people that have been so loyal to the party and are actually fighting for the cause for the last 40 years. I have the unique perspective to actually bring both of those camps together to the table to say regardless of how you want to be engaged in the process, we all have to work together to ensure that this works for everybody in Kentucky.”

Rising Democratic star and former state Auditor Adam Edelen was one of the surprising casualties of the Kentucky Democratic Party’s 2015 ticket. He and Kentucky Sports Radio host Matt Jones started the New Kentucky Project similar to Nishimuta’s unifying strategy to seek consensus among Kentuckians with opposing opinions on policy and to move the state forward. As the new executive director, Nishimuta hopes the KDP can serve as a hub for groups looking to better the state through their own organizations.

“I think a lot groups like the New Kentucky Project, the Kentucky Initiative, Indivisible, Together We Will, those are all really important facets of civic engagement and political discourse that people should get engaged in,” Nishimuta said. “I see the KDP as the hub and then the other organizations like New Kentucky Project, Kentucky Initiative, Indivisible, Together We Will all those as spokes and they each have focus areas they are working toward, but together hopefully we all are going to be coordinated working toward the same goals.”

The first priority will be organizing, working with the KDP’s State Central Executive Committee members and working with county parties to help implement the ongoing 120-county strategy and rebuild in the counties where the party needs a stronger presence in preparation for the 2018 elections.

Building the party from the bottom up, for Nishimuta, will mean listening to people throughout the state in order to understand where communities are hurting and having candidates that address those needs. Another part will be educating constituents on the impacts of issues like right-to-work legislation or charter schools. Most important for Nishimuta and the party will be building the bridge.

“I think there are people who are very wary who have been engaged with the party for 30 or 40 years. I understand that,” Nishimuta said. “The people that have been here know so much about how stuff works, what has worked in the past and not worked in the past. I respect that. I think we have this new energy, new ideas about messaging and issue-focused communications that we can marry with knowledge. My number one priority is to not lose either part, but unite us to make us a stronger party.”

KDP chair Rep. Sannie Overly said Nishimuta will be an asset to the party.

“Mary has a deep background in grassroots organizing, as well as extensive management experience in the private sector,” Overly said. “She will be a tremendous asset to the party as we fight for better jobs, education and health in Kentucky.”

Nishimuta replaces former director and chair Daniel E. Logsdon Jr. who served from 2010 until 2015. Logsdon was appointed by former Gov. Steve Beshear as commissioner to the Public Service Commission.

Growing up in Louisa – by Mike Coburn - HUNTER/GATHERERS!