FERRIS WHEEL BY THE NEWPORT AQUARIUM IS EXPECTED TO SPIN 500,000 RIDERS A YEAR 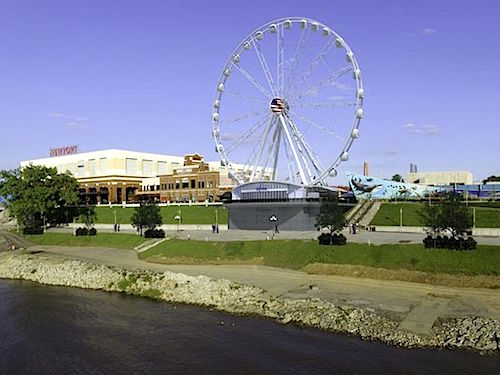 Newport won’t give up on the giant Ferris wheel on the banks of the Ohio River after all.

A modified design for the SkyWheel will likely pass muster with the Army Corps of Engineers, said Harold Dull, general manager for Newport on the Levee.

If all goes well, people in Newport can enjoy views of the city and river from enclosed gondolas atop the 235-feet Ferris wheel in the summer or fall of 2018.

The Ferris wheel by the Newport Aquarium at Newport on the Levee is expected to spin 500,000 riders a year.

“It’ll be iconic for Newport on the Levee,” Dull said.

What’s changed? The $10 million project won’t cut into the floodwall like the original design. That’s why the Army Corps of Engineers rejected to first design. The new design by the wheel’s owner and operator, St. Louis-based Koch Development, would put the SkyWheel on a pier jutting out in front of the floodwall, Dull said.

Koch Development operates a SkyWheel in Myrtle Beach and would manage the Newport one. It would operate year-round since each of the 30 gondolas would be enclosed and climate-controlled. LED lights will illuminate the wheel at night.

Some in Northern Kentucky might be skeptical that a project like this will succeed. After all, many attractions in the past have been planned and never completed at or near the riverfront in Northern Kentucky – a 1,200-foot-tall Freedom Tower, a high-speed monorail, a floating Tall Stacks museum.

Army Corps officials have assured Dull that the new designs look like they’ll meet federal requirements, he said. They hope to get approval soon, Dull said.

“We’re excited to be part of this development and have construction start later this year,” Dull said.

Calls to Koch were not returned. How much the wheel will cost per ride wasn’t available.

SKEANS IS KEYNOTE SPEAKER AT BSCTC COMMENCEMENT CEREMONIES MAY 5-6