UTILITY BOARD VOTES FOR CITY TO TAKE OVER COUNTY SEWER SYSTEM 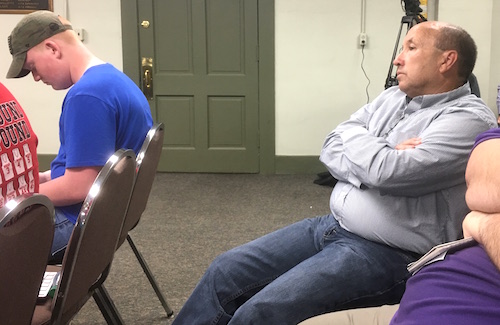 The group received an update from P&A Engineering on the sewer rehab project. The contract between the City and the Engineering firm will be finalized after a few issues are revised, Mayor Harold Slone said.

P&A Engineering stood in agreement that they were ready to begin with short notice the camera process for the sewers. The contract will have to be reviewed and approved by the City Council.

* A motion by Heath Preston, second by Mitch Castle to approve the minutes from the March regular meeting and the April 4th special meeting. All members in agreement.

* City employee Martin Wright then updated the committee on the water loss project. The City has purchased an iPad for a computer program that helps track and identify water loss areas and amounts. All departments will have to account for the water that is used.

* After a lengthy discussion about whether the City should take over the part of the sewer system run by the County, County Judge/Exec John Osborne stated, “The County just wants out of the sewer business. We have no reason to stay in that business. The County is losing money monthly.”

An accounting of the revenue and expenses were discussed at length. In the end, a motion was made by Steve Lycans, second by Jeff Kinser to assume the responsibility of the sewer system and relieve the County of that liability. all were in agreement. The city council, however, must approve all actions of the sewer commission.

The City is taking applications and resumes for a Class 2 or Class 3 Wastewater Treatment Operator. The application can be found at the city’s website. cityoflouisa.org

The meeting was adjourned.