PIKEVILLE, KENTUCKY MAN OUT ON BOND AFTER SIMPLE SPEEDING INFRACTION LEADS TO WILD POLICE CHASE IN MARTIN COUNTY, DAMAGING DEPUTY’S CRUISER; ALL BECAUSE DRIVER WAS AFRAID THAT IF HE WENT TO JAIL. “HIS GIRLFRIEND WOULD LEAVE HIM” 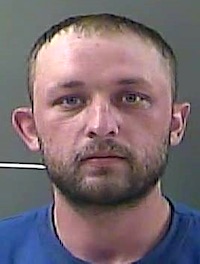 What started out as simple traffic stop by a state police officer for speeding infraction by a driver, instead turned into a high speed pursuit that left a Martin County sheriff’s deputy with a damaged cruiser vehicle after the car pursuit late Tuesday afternoon, and a Pike County man facing a dozen criminal charges and traffic citations.

The bizarre incident happened on Tuesday, April 11, at about 4 p.m. near the Debord area of Martin County, just south of Inez.

The hot pursuit began when Kentucky State Police trooper Mike Goble tried to pull over a driver for speeding. Instead, the driver sped on away.

The gnarly chase went on for about six minutes and 6 miles.

Martin County Deputy Billy Patrick joined in the after it went by his home.

Deputy Patrick said the driver, identified as David J. Harmon, 27, of Pikeville, said after he was finally caught when Patrick’s police cruiser and Harmon’s vehicle collided, stated to officers he didn’t want to go to jail because if he did, his girlfriend would leave him.

“It upsets me,” Patrick said. “He endangered so many people, myself and the trooper too, just because he was afraid his girlfriend would leave him. It’s nonsense.”

Patrick said he knew a school bus was in the area so that’s why he tried to get in front of Harmon’s vehicle.

This is not the first time David J. Harmon has had a major run-in with law enforcement, as he has a checkered criminal past, having been arrested multiple times, on multiple felony and multiple misdemeanor charges, as well as multiple traffic violations, in multiple eastern Kentucky counties in the last several years.