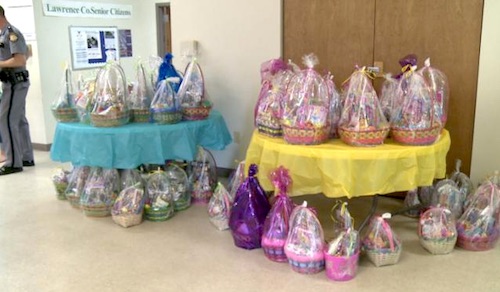 On this coming Easter Sunday, April 16, many children around the United States and across the world, will be waiting to see what has been brought to them by the Easter Bunny. For some however, including a few in Lawrence County, there may not be any gifts brought to them.

That is why political and business leaders in Lawrence County, along with with local state troopers, got together for an event to help as many underprivileged children in the local community to ensure they have a happy Easter.

A charity Easter dinner and Easter basket event and operation that started in Pikeville in 2015, was expanded and began for the first time this Easter holiday 2017 in Lawrence County 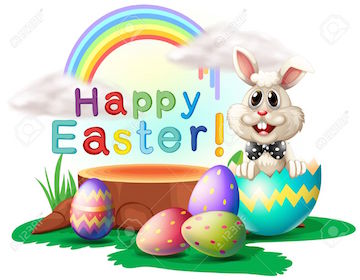 Leading officials and citizens in Lawrence County say they wanted to reach out to as many children as possible to make sure they have a good Easter. On Tuesday, April 11, they fulfilled that wish and provided Easter baskets to more than 50 local kids.

“We just like to do it because we know that there are kids that don’t get to do stuff and they don’t get to go places,” said Tamyra New, a sponsor of the Easter basket dinner event. “We will go around and do what we need to do to make them happy.”

Local leaders said they hope the giveaway will bring joy to children that may not receive an Easter basket on Sunday.

State troopers from Kentucky State Police Post 14 in Ashland stopped by to help out and have fun with the kids.

“We are just assisting with the event,” said Trooper Michael Murriell. “We are just here to talk with the kids and interact and let them see law enforcement on a different side than sometimes a lot of people see us.”

Lawrence County Judge Executive John Osborne said it was nice to see others coming together to help children in the community.

“That’s what we need, community involvement,” said Judge Osborne. “If it wasn’t for that, we wouldn’t have nothing because you’ve got to have people involved to have it. We are just lucky we’ve got good people here in Lawrence County.”

The children were also given dinner, dessert and all of them also got to participate in an Easter egg hunt.

The organizers of the charity event said this was the first year for the Easter basket giveaway in Louisa. However, they have held a similar event in Pikeville for the last two years.

The hope for everyone involved with this year’s new Easter celebration event in Louisa is that it will become a yearly tradition.