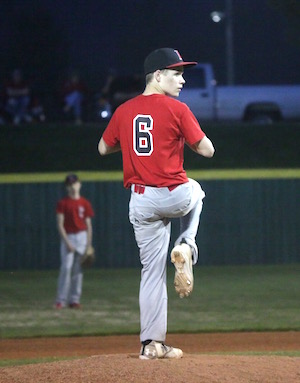 Louisa, Ky. —  Lawrence Co. Middle Red Team improved its record to 2-1 on Monday night as they defeated East Carter 11-1.  The Bulldogs pounded out 10 hits while Jacob Fletcher went the distance on the mound giving up just two hits while finishing with eight strikeouts.

East Carter began the scoring in the top of the first with a deep triple to center field and came in to score as the throw back into the infield went in the Lawrence County dugout.

The Dawgs answered with 6 runs in the bottom half of the inning. The offense was helped with a couple of walks and a Baden Gillispie double that plated three runs, that was followed  by a Ty Hutchinson RBI single. The Bulldogs added 4 more runs in the second on four hits, singles from Easton Bevins, Danny Hall, Hutchinson and a triple from Gillispie.  Bryce Blevins added a double in the third frame, followed by an RBI singles from Hall and singles by Jacob Fletcher and Blue Fletcher rounded out the Bulldog hitting.

On Tuesday night Lawrence County Red Team and Boyd County played to a 7-7 tie.  The Bulldogs and the Lions intended to play 7 innings on Tuesday but after 8 innings a winner could still not be determined.

Boyd County began the scoring with one run in the first and three more in the 3rd inning off of starting pitcher Danny Hall.  The bulldogs answered in the 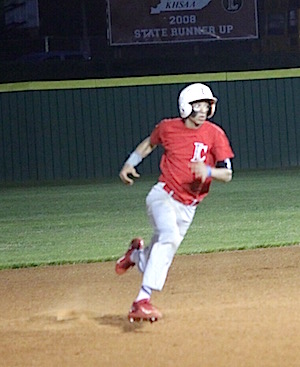 bottom of the 3rd with four runs to tie the game.  The Dawgs scored their runs on only 2 hits from Easton Bevins and Ethan Whitt, as the first two batters of the inning reached by the benefit of errors by the Lions.  Boyd County answered with two more in the fourth and Lawrence tied the game again with two runs its half of the fifth on singles by Bryce Blevins, Danny Hall and Baden Gillispie.  Boyd scored to take the lead in the seventh 7-6. Hall led off the bottom of the inning with a leadoff triple that was smoked into the right center gap and later scored on a wild pitch to even the game back up. Neither team could push a run across in the 8th inning and both teams agreed to end the game in a tie.  Danny Hall worked 3 innings, Kyle Davis began the fourth inning and Easton Bevins pitched 1 1/3 innings as he came in to relieve Davis with 2 outs in the 7th inning.

“…I felt like we came out and played very well against East Carter, I was a little worried because we hadn’t been together as a whole unit since before spring break.  Jacob pitched very well and when they did put the ball in play we made the routine plays we needed to.  We limited them to 5 baserunners, 2 hits and 3 walks.  That is pretty good in a middle school game.  We also pounded out 10 hits in three innings.  I was extremely pleased with how we played.”

“…We weren’t the same team defensively vs Boyd Co. as we were last night.  I felt like we should have made some plays on several balls put into play. Danny Hall gave up 4 runs but I don’t believe any of those were earned. I thought tonight was his best outing of the season. I also thought Kyle Davis did a great job coming in behind him. Davis gave up 3 runs but only one of those was earned.  I expected only two innings from him but he kept his pitch count down and threw 3 2/3 innings.

Easton Bevins finished out the game and he did exactly what I expected him to do, come in and throw strikes.  Bevins finished with 3 strikeouts of the 4 outs he recorded.  We allowed 7 runs but only gave up 6 hits. One bright spot was that when we put ourselves into trouble we minimized the damage. On several occasions we put guys on base and were a big hit or two from putting this game away but we did at least step up and keep them from having huge innings.”

Offensively, I believe we struggled a little. We managed only 6 hits.” I remember a couple of times we had a runner on third with less than two outs and we couldn’t get that run in.  Those things come back to haunt you and can keep you from winning the game.”