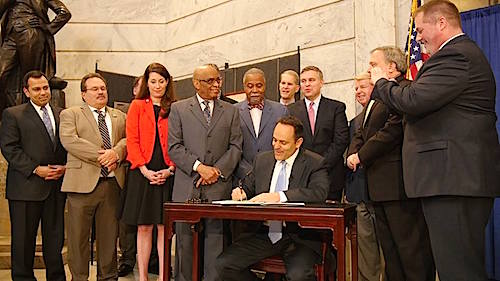 Kentucky’s school districts will have more independence in evaluating teachers and turning around struggling schools under an omnibus education reform bill signed into law by Gov. Matt Bevin on Monday.

Republican state Sen. Mike Wilson of Bowling Green is the main sponsor of Senate Bill 1. The bill takes advantage of the federal Every Student Succeeds Act, which replaced the No Child Left Behind Act in 2015 and returned power to states and local districts.

“I think one of the biggest things is allowing our teachers to teach,” Wilson said of the bill, adding it will also free teachers from “onerous” reporting requirements.

The law ushers in wide-ranging changes to Kentucky’s education system including allowing districts to create their own systems for evaluating personnel. Under the law, those results cannot be required to be reported to the Kentucky Department of Education.

In describing the law, Wilson said a major element includes overhauling how state academic standards are reviewed to better include teacher input, describing them as people who have “boots on the ground” when it comes to educating students.

Standards in social studies, math, science and language arts would be reviewed on a staggered schedule every six years under a process that involves educators and public comment.

“It allows us to really take control of our own academic standards,” Wilson said,.

Other changes, Wilson said, are reforms to how schools are held accountable for students’ success. The law requires college admissions and placement tests to be given in the tenth and eleventh grades.

Annual evaluations conducted by the KDE for districts and schools can’t be a single numerical score that pits schools against each other, either.

Schools would also be responsible for metrics including high school graduation rates and college readiness by gauging students’ performance on college benchmarks and credit accumulation.

Districts will also have more latitude in how they turn around schools performing in the bottom 5 percent.

The bill allows local school boards to put together turnaround teams made up of district personnel, an outside contractor or the state, although the previous two options require state approval.

Senate Bill 1’s success represents a victory for Wilson, who’s been collecting feedback from educators across the state for at least two years.

A push for the bill last year was halted when it failed to get a hearing in the House after passing in the Senate.

Superintendent Gary Fields of the Bowling Green Independent School District said he appreciates the work of Wilson and other lawmakers in creating a teacher evaluation system that’s “user friendly and meaningful” and the current system as “unmanageable.”

“It’s more about districts reporting to their stakeholders ‘what are we doing,’ ” he said.

Lawrence County Supt. Dr. Rob Fletcher has been contacted for his comments on the new bill, and he has responded…

“…Senate Bill 1 makes many changes in the educational system for all Kentucky students and educators. Those changes will occur in areas such as teacher evaluation, state testing, academic standards, and others. First, school districts can keep their current Professional Growth and Effectiveness System (or PGES, for personnel evaluation), or revise it. Second, the state testing system will have many of the same basic features such as testing math and reading in grades 3 through 8, but Senate Bill 1 allows for the Kentucky Department of Education to develop a different set of tests for accountability. Third, Kentucky educators will use the current Kentucky Academic Standards for the upcoming year, but Senate Bill 1 requires that KDE develop a process for reviewing academic standards every 6 years, beginning in 2017-18.

Other changes include, but are not limited to:

The removal of program review as a part of accountability;
the inclusion of a college admissions examination in grades 10 and 11;
a new method of displaying school/district report cards on the KDE website; and a change in the labeling system (proficient, distinguished, focus, persistently-low achieving, etc.).

Overall, there are many positive attributes to Senate Bill 1. The implementation and timing of change will provide “growing pains” for school districts. There are many unanswered questions that will require time for the research and the development of processes to address the modifications on both a state and local level. Even though these modifications affect many areas, the educators that work for the students of Lawrence County will adapt and provide the best for our kids.”