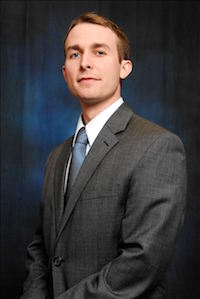 Jaryd H. Crum, a 2016 graduate of the University of Kentucky College of Law  and a 2013 graduate of Eastern Kentucky University, is an Associate Counsel at Kirk  Law Firm effective April 3,2017.

During his time at Eastern, Jaryd worked as an Intern at the Kirk Firm for three  summers. While a student at UK Law School, Jaryd clerked for Franklin Circuit Judge,  Phillip Shepherd, and also earned the C.A.L.I., which is the highest grade in the school’s  State Constitutional Law course taught by U.K. General Counsel William E. Thro. After  his graduation at UK Law, Jaryd attended the Johns Hopkins University where he studied  government. Jaryd is licensed to practice law in the Commonwealth of Kentucky and in  Washington D.C.

“We are delighted to have this young man as counsel at our firm,” John C. Kirk, a  Partner at the Kirk Firm said. “From working with him during the summers of his college  years, we learned that he has the highest integrity and an outstanding work ethic.”

Roll Call Magazine, a Frankfort publication, has often published rankings of  Kentucky lawyers who represent persons with work injuries and Black Lung and has  often listed the Kirk Firm as the State’s number one firm for those cases.

In 2000 the Kirk Firm successfully represented 672 Martin County and Lawrence  County property owners against Martin County Coal Company and Massey Coal  Corporation for “Sludge Damages” to their properties following the collapse of a sludge  lake on the Martin County Coal property, an event that released 300 million gallons of  sludge into Martin County streams and then into the Tug and Big Sandy Rivers.

The Kirk Firm represented the estate of a man killed by a coal truck that crashed  into his vehicle and the Firm recovered damages from the owner of the truck and-in a  precedent changing action-recovered damages against the coal company that  ”overloaded the truck,” knowing that the truck would be operated on an unsafe road.  Recently, the Kirk Firm received a $27,000,000 Judgment in the Knott Circuit Court for a  client in a case against a coal company.

“Jaryd is the very kind of attorney who will continue our Firm’s success in  representation of the hurt and disabled and others,” Kirk said.

Jaryd is married to his high school sweetheart, the former Jessica Maynard. His  parents are Benton and Teresia Houston Crum of Inez.