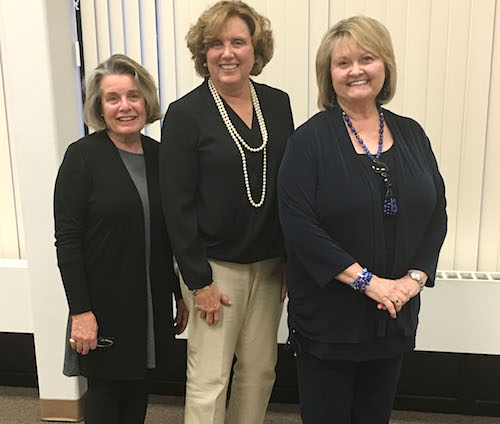 Lynn Dorton Mullins of the Delta Sigma Sorority was the guest speaker and spoke of her late mother, Betty Dorton, and her passion for the community and nursing.

“She loved nursing and believed in giving back to her community,” said Mullins. Dorton served as the sponsor of the Delta Sigma Sorority for 20 years. “She was the neighborhood nurse and was called the shot nurse because she was the one who visited to schools to give the shots.”

“Those around you notice all the good work you do,” he said. “Not every student will get it perfect, even when things go wrong, don’t lose heart because your work still matters.”

Tanner Shepherd, a second-year Honors Program student, talked about the doors the program opened for him during his time at BSCTC.

“Just a few weeks ago, I received a letter from the University of Kentucky informing me that I had been selected to the Electrical Engineering program,” he said. Shepherd is a first-generation college student. “I want to thank Summit Engineering, the William G. Duke Endowment and the North Carolina Coal Institute that helped pay for my scholarship.”

Hazel Collins Tackett, a recipient of the Kentucky Colonel’s Better Life Scholarship, spoke of her journey to higher education. In 1983, she was born three months premature and suffered a brain aneurysm. Her mother was told that Tackett may die or be mentally disabled. To make matters worse, her father was murdered.

Tackett is a single parent and a part of the college’s Ready to Work program.

“I am no longer a victim. I am a survivor,” said Tackett. “I stand before you determined, dedicated, motivated and strong enough to continue my journey leading to my goals of earning a college degree in criminal justice.”

Brooke Goble, a member of the Honors Program and President’s Ambassador program, expressed her appreciation to donors.

“Without the donors that support this college and its students, I would not be where I am today,” said Goble. “This school and its contributors have poured into me and invested in my future so I can accomplish my goals.”

Goble will graduate in May with an Associate in Science degree and plans on attending Eastern Kentucky University to major in biology.

FACES OF HOPE - WE DO RECOVER #33, the Jason Emerson story