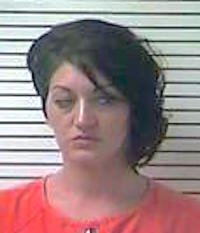 An Elizabethtown woman was arrested today for having a then 14-year-old boy over at her home in November and having sexual relations with him, according to an arrest warrant.

According to her arrest warrant between Nov. 25-27, 2016, Emory provided the boy alcohol while he was on a holiday pass from Spring Meadows Center in Mt. Washington where he was a resident and Emory was employed as a counselor at the facility operated by Sunrise Children’s Services.

The rape and sodomy charges are Class D felonies punishable by one to five years in prison on each charge, if convicted. The third-degree unlawful transaction with a minor charge is a misdemeanor.

This is Emory’s second set of sex scharges involving the minor. She was arrested last month and charged with performing a sex act on a 14-year-old boy in his room at Spring Meadows while she worked there.

She was charged with third-degree sodomy, first-degree unlawful transaction with a minor and first offense trafficking in a legend drug, all Class D felonies punishable by one to five years in prison on each count, if convicted.

Emory is being held in lieu of a $50,000 cash bond in the Hardin County Detention Center