FACES OF HOPE, WE DO RECOVER #32, the Kayla Sargent story

Our 32nd spotlight in the FACES OF HOPE: WE DO RECOVER series will focus on Kayla Sargent’s story, “Radically Redeemed.” 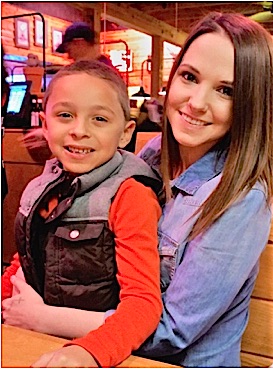 I was born & raised in a small town in Florida, to a mother that wasn’t supposed to have any more kids. I was my parent’s little “miracle baby.” So, needless to say I was my Daddy’s girl and my Mama’s world. I grew up in a very tight knit family, we loved & cherished each other…and we also knew how to give each other a hard time every chance we got.-(pranks and jokes were a typical part of our Sunday dinners, especially when my Dad was involved) I was taught right from wrong, and knew to treat people with respect. My Mom had us in church every time the doors where open, and Dad made sure that I knew all about Jesus and His amazing grace.

When I was 6 years old, I came home from school and was told by my parents that my Dad had terminal lung cancer. Being so young, I didn’t know exactly what this meant. But the tears running down my mother’s face told me it was not good. Later on his cancer went into remission for a little while, but came back a year or so later. It had came back in his lungs, and this time it had metastasized to his brain. When I was 9 years old, I was pulled out of school early one day and rushed to the hospital. I remember getting off the elevator, to find my big brother waiting by the doors sobbing he picked me up and took me into a private room where he told me that my Daddy had died and went to heaven to be with Jesus. In a state of shock I tried to comprehend this information, I clung to my brother and tried my best to hold back my tears. In that moment, a scared and broken little girl found the anger and bitterness that would haunt her for years to come.

I was so young when my Dad died I didn’t know how to mourn losing him. So when I came into my teenage years, the grief of losing him started to set in and take its toll. So, I started to sneak out to drink and party to numb the emotions I was experiencing. It wasn’t long before I was in a constant state of defiance and rebellion. My Mom did her best to try to get me to straighten up, but the more she tried the harder I pushed. After several run-ins with local law enforcement I ended up getting expelled from school for having marijuana & drug paraphernalia on campus. I had become reckless and out of control.

A year or so after getting kicked out of school I was introduced to pain pills, things went from bad to worse. Within a few weeks of becoming addicted to pills I was placed under arrest for the first time as an adult, and taken to jail for domestic violence and burglary.

Soon after my first trip to jail, I moved to Nashville. It was a vain attempt to run from my addiction. After being in Nashville for a few weeks I started to drink again, excessively. I managed to stick to just drinking for several months, and thought I was doing good because I was remaining abstinent from other substances. But that quickly changed, when I attended a party on the out skirts of the city one night, and as usual I had way too much to drink. Sometime in the early morning when the party was starting to die down, and everyone was starting to pass out from the copious amounts of alcohol, I found myself being forced into a back room where I was raped by a strange man that had been attempting to flirt with me earlier that night. The sense of shame & worthlessness that came along with that experience not only fueled my drinking, but it also led me straight back to abusing pain pills as well. Even the combination of mixing alcohol and opiates couldn’t mask the agony I was dealing with inside.

About a year after that incident, I was doing my best to cover up my alcoholism and opiate addiction. Then unexpectedly, I found out I was pregnant. I did my best to clean up my act while I was pregnant. On New Years Eve of 2009, I brought my precious little Sawyer Richard into the world. Having my son gave me a whole new definition of love. It was a different, deeper love than I had ever experienced before. I thought I had finally found the one thing that would give me a reason to stay sober, my son. And I was for a little while.

When Sawyer was about 6 months old, we moved to West Virginia. That was mistake number one. I was introduced to opana’s, heroin, and meth not long after we moved there, and my addictions spiraled out of control. At different points along the way I was arrested by county, state, and federal authorities. After a couple overdoses and spending more than enough time locked away in jail cells, I finally realized that my life had had become unmanageable, and that I desperately needed help.

When I realized I had completely ruined not only my own life, but the lives of my loved ones. I knew that it was time to get back to my roots, and look to God to fix the mess I had made, because He was the only one that could. So I went to detox, I refused to go to a regular rehab because I knew I needed to go to a faith based facility. God was the only hope I had, and I was well aware of that. I ended up having to stay an extra 4 days in the detox unit, waiting for my counselor to find a faith based facility that had an open bed. Finally, he got a call saying there was an open bed at Karen’s Place & I had no doubt that was where I was supposed to be. The love and compassion I was shown by the staff made me realize that I was worth saving, and that recovery was possible. I surrendered my life to God, and never looked back. I finally felt like I was so much more than just a hopeless drug addict. It just finally clicked, and I realized I could do this.

Describe the feelings and emotions while in active addiction

I was in a constant state of self-hate. I felt useless, and had no self-worth. I would pray for that final overdose that I would never come back from, because that seemed like the only end to my misery. Chaos and dread were the only things I had known for so long. I just thought that was life I was destined to live, recovery seemed so far-fetched I never thought I would make it out of addiction alive.

What is the driving force that keeps you going when times get tough?

Jesus. The love, redemption, and peace He has given me is something I can’t put into words. Anytime I get overwhelmed with the craziness of life, I quickly remind myself of where He has brought me from and that always puts things into perspective. I don’t deserve the life I live today, but I am so grateful that He loved me enough to snatch me from the grips of death and set me on the solid foundation of His love and mercy.

What obstacles or roadblocks have you encountered along your recovery journey?

Well, I have had to deal with people reminding me of my past and insinuating that I would never be able to overcome my addiction. However, I finally realized that is there problem not mine. If they can’t move forward, it’s ok. Because I know who I am today, and how hard I’ve had to work to get here. God is the one who dictates my journey, not them. And He has forgiven me, and I have forgiven myself, that’s all that really matters at the end of the day. Yes, I have done some terrible things in the past and I can own up to those things today. But the simple fact is, I’m not that person anymore.

What is something you want people who have never struggled with addiction to know?

Unless you have experienced addiction, there is no way for you to have any real concept of the power it can have over someone. It is something that takes a hold of your inner being, and doesn’t let go. When someone becomes consumed by it, they no longer have any care or concern for their own life, much less anything else. And that is an agonizing place to be. Have compassion, and realize that someone in active addiction is the epidemy of hopelessness. They just need someone to help them see that small spark of hope that can start a fire within them.

What advice do you have for the family members of a person in active addiction?

Love them, but don’t love them to death. Don’t enable their addiction, but let them know that they can always turn to you when they are ready to get the help they need. Tough love must be shown, but don’t completely shut them out. They need to know that someone still believes in them, and that they matter & are loved regardless. I don’t know what would’ve happened to me, if my family would’ve given up on me. I would not be where I am today had it not been for my Mom refusing to give up on me…cause honestly I had already given up on myself when I hit my lowest low, she was the only one fighting for my life during those last few months in addiction. I probably wouldn’t be alive today if it wasn’t for that woman loving me through it all.

We all struggle in one way or another, no sin is greater than the other. So don’t be too quick to judge you never know what someone has went through, or is going through that has led them to the depths of addiction. Addiction is a dreadful existence, but with the right help and the willingness to surrender you can overcome & hope can be restored. You are never too far to be redeemed by God’s amazing grace, that is what it is for.

$30,000 FOR NICKEL TAX RECALL? NEW LAW SAYS PETITIONERS MAY HAVE TO PAY