DAWGS TAKE CARE OF KNOTT CO., HEAD TO THE BEACH

LC HEADED SOUTH FOR BETTER WEATHER AFTER WEEK OF RAINOUTS

Hindman, Ky. — After three consecutive rainouts to begin the week Lawrence Co. ( 5-2 ) finally got to play and boy did they play in a 14-2 mercy shortened road victory over 14th Region Knott Co. Central ( 5-3 ) on Thursday night. This was a good tuneup before the Dawgs leave for Myrtle Beach on Saturday. 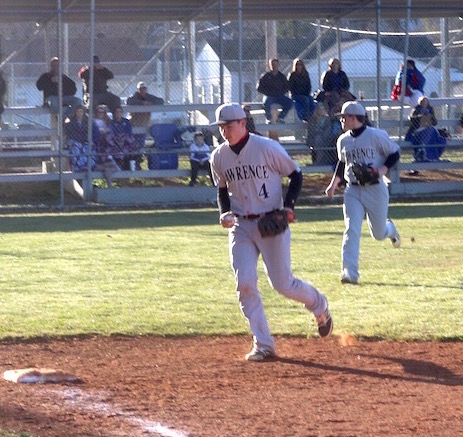 CJ Fairchild went four innings to get the victory and Bryce Blevins went one inning to close it out for the Bulldogs.

The top of the lineup for the Dawgs did major damage vs the Patriots as Peyton Cyrus, Brad Parks, CJ Fairchild, Austin Roe and Jackson Feltner combined for eight hits, ten RBIs, ten runs scored and were on base twelve times. Trace Bowen had one hit and one run scored, Tyler Maynard had one hit and scored two runs, Kade Sword scored a run.

“… Good win for us on the road, rain has played havoc this week. The top of our lineup is playing well right now. Peyton Cyrus and Brad Parks are really swinging the bats well. Real tough competition vs Louisville Male right off the bat at the Beach.”