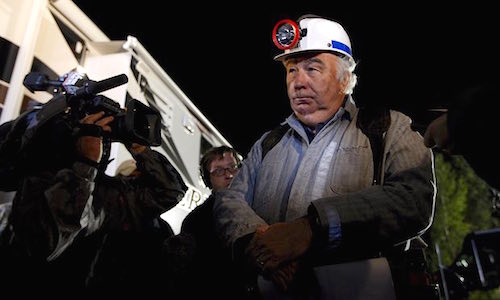 America’s biggest coal boss is hopeful that his industry will soon be freed of “fraudulent” green legislation that has hampered his industry, but warned Donald Trump to “temper” expectations about a boom in mining jobs.

Robert Murray, founder and chief executive of Murray Energy, the largest privately held coalminer in the US, is confident Trump will follow through with campaign plans to reinvigorate the coal industry and will start by scrapping Barack Obama’s clean power plan (CPP), Obama’s signature climate change plan.

The CPP was designed to cut the power sector’s carbon emissions by 32% by 2030, and Trump may move as soon as this week to overturn it. Murray blames it for shuttering coal-fired power plants and freezing new constructions during the Obama presidency. Repeal would be a major victory for Murray Energy, which filed a lawsuit against the CPP in 2015 that is now backed by more than two dozen states.

Murray, who met with Trump last month, also expects the president to end the classification of carbon dioxide as a pollutant in the US, a classification brought in under the Obama administration. “We do not have a climate change or global warming problem, we have an energy cost problem,” Murray told the Guardian.

Murray met Trump in February when the president signed repeal of the Stream Protection Rule, Obama-era legislation that prevented coal companies from dumping mining debris in streams and which Murray called an “unlawful and destructive” attempt to “destroy our nation’s underground coalmines and put our nation’s coalminers out of work” .

It was the 77-year-old Murray’s first visit to the White House and, he hopes, the first of a series that will help push coal’s agenda.

Trump pledged to bring back coal jobs during his presidential bid and repeated those promises last week. “As we speak, we are preparing new executive actions to save our coal industry and to save our wonderful coalminers from continuing to be put out of work. The miners are coming back,” Trump told a rally in Louisville, Kentucky.

While Trump did not provide specific details, he did reiterate plans to defang the Environmental Protection Agency (EPA), now led by Trump appointee and longtime EPA critic Scott Pruitt, the former attorney general of Oklahoma. Trump said this week he would transform the EPA from “a job killer into a job creator”.

Murray has presented Trump with a plan, part of which would overturn many of the protections brought under Obama in by the EPA, including the 2009 classification of carbon dioxide as a pollutant – a ruling known as ‘the “endangerment finding”.

During the campaign Trump, who has called climate change a “hoax”, said Obama’s regulation of carbon dioxide was “an overreach that punishes rather than helps Americans”.

Trump’s election has been a boon to coal, said Murray, after what he sees as Obama’s attempts to destroy the industry. But he has also warned the president he should “temper” expectations for jobs growth in the industry.

“I would not say it’s a good time in the coal industry. It’s a better time,” he said.

BIPARTISAN RECLAIM ACT OF 2017 TO BRING $1 BILLION TO COALFIELDS