WHITETAIL DEER WAS FOUND INSIDE THE PIKEVILLE WALMART 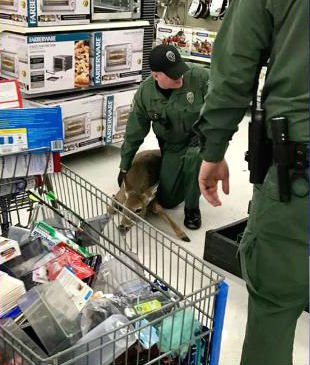 A female whitetail deer was found inside the Pikeville Walmart on Sunday. Fish and Wildlife were called to the scene and were able to securely remove the deer from the location. They were able to successfully release her back into the wild without injury.

Brook Mahan was shopping in the store when she noticed the deer by the front doors.

“When I saw it (the deer) a lady was trying to hold it down, it kept trying to get up but the floor was too slick for the deer to stand,” Mahan said. She was able to take a picture of the lady stabilizing the deer by the front of the store. She said “it kept flopping around for a few minutes, then it managed to get up and move toward the grocery section of the store.”

Other customers said they noticed the deer walking in close proximity to the front of the store, in the parking lot, just minutes before the news spread that there was in fact a deer being held down inside.

Adam Newsome was shopping with his young son, Max Newsome when they saw Fish and Wildlife working to remove the deer from the store.

“I was really impressed with how the Kentucky Fish and Wildlife handled the situation, they were really good with the deer, and they kept it calm,” Newsome said. “It was a real feel good story, and my son got the biggest kick out of it ever.”

Many customers took to social media with pictures of the small deer being detained in the housewares department of the store. Customers were able to keep the deer stationary until the authorities arrived and were able to remove her.