TWELVE NEW PLAYS BY ACTC STUDENTS WILL BE PERFORMED 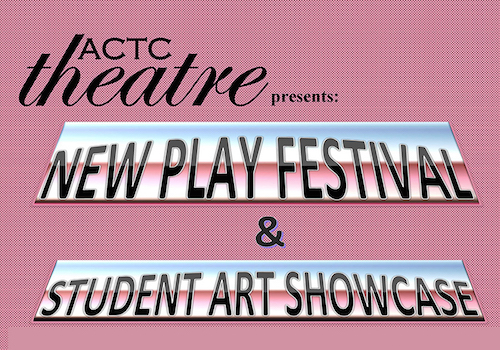 Twelve new plays by ACTC students will be performed at 7 p.m. April 7 and 8 and 2:30 p.m. Sunday, April 9 in the J. B. Sowards Theater at the College Drive Campus.

The 12 scenes, monologues, short plays and one-act productions were written by ACTC students in a playwriting class taught last fall by Assistant English Professor Johnathan Joy. Some playwrights will also direct their own works. Other directors include ACTC faculty and Fairview High School students and faculty.

“I am very excited to see our students’ work on stage,” said Joy, founder of the festival. “We have a lot of talented writers and artists on campus, and this event is such a great way to showcase their creativity. I hope folks come out to support them in this endeavor.”

“Watching the student playwrights see their plays come to life on stage is my favorite part of the New Play Festival,” said Sarah Diamond Burroway, director of external relations at Ohio University Southern and festival coordinator. “

Mikaela McDonald, an ACTC student from Ashland, wrote a monologue called “When I See You Again,” which she will also direct. McDonald said the piece is from a larger work she wrote and takes place in a graveyard.

In the scene, the main character is, “talking to the headstone of his friend and reminiscing on their childhood, friendship and deep regrets as he realizes his death was completely avoidable, and completely his fault,” she said.

Sarah Diedrich of Wurtland wrote a monologue called “Writer’s Block,” which will be directed by ACTC Communications Professor Mary Shortridge. “I actually had writer’s block when I wrote it, which is super ironic,” Diedrich said.

Noel McDavid from Grayson wrote a monologue of letters called “Starlit Healing,” which will be directed by Ashley Hacker of Portsmouth. “The play deals with homophobia, suicide, bullying and prejudice,” he said. “It was partially influenced last year’s mass shooting at the Pulse nightclub in Orlando, as well as personal experiences.”

Catlettsburg resident Erin Moore wrote a play called “How it is Really Done,” which will be directed by Fairview High School teacher Jim Maggard. “It’s a political satire about a general politician and their assistant trying to get a proposal written for a meeting,” Moore said.

“Stuck in Limbo,” written by Kelly Vance of Ashland and directed by Fairview student Carly Newsome, is about a young woman named Eileen, who wakes up in Limbo after ending up in a hospital after a car wreck.

“I’ve left the ending up to the interpretation of the viewer; whether she just went into a further part of Limbo, back into the mortal realm to awake in the hospital, or maybe she passed on into Heaven,” Vance said.

“ACTC Theatre is one of the few community theaters in Kentucky that has made a commitment to producing new work. As an alumna, this makes me proud,” Burroway said.

“Since the festival began, several ACTC playwrights have had plays accepted into the Kentucky New Play Series which is produced annually at the state fair,” she said. “ACTC playwrights have also had one-act plays and monologues produced by other theatres in Kentucky, Ohio, West Virginia, New York and California.”
General admission tickets for the New Play Festival are $5 and available at the door.

Also, artwork by ACTC students in spring classes taught by Professor Wendy Fosterwelsh will be exhibited during the three days of the festival.
For more information, contact Joy at jonathan.joy@kctcs.edu or Burroway at burroway@ohio.edu.