Heroin, Meth seized in arrests; Mother who had 5 year-old with her also charged with neglect 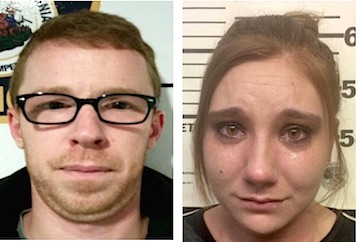 On Sunday, March 19, Wayne County Sheriff, Rick Thompson along with the Wayne County Sheriff Department Drug Enforcement Unit arrested Sean Robertson, 29 of Kenova in the Westmoreland area of Wayne County. Robertson was charged with Delivery of a Controlled Substance (Heroin) and Conspiracy. Both were felony charges. He was taken to the Western Regional Jail.

Also arrested on Sunday was Kendra Woolard, 23 of Lavalette. Woolard was arrested on four felony charges. The charges include: 2 counts of Possession with Intent to Deliver a Controlled Substance, Crystal Methamphetamine and Heroin, one count of Pseudoephedrine in an Altered State, and Child Neglect. Woolard’s 5 year- old son was at the scene when she was arrested. The child was released to the child’s aunt. Woolard was also taken to Western Regional Jail.

This is two of the over 15 drug related arrests in Wayne County since January 1, 2017 when Thompson took office.