New tax by BOE has been challenged 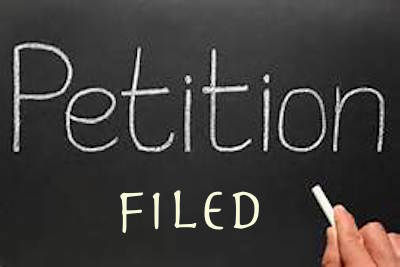 Lawrence County Clerk Chris Jobe said today that a petition has been applied for to demand a vote on the ‘nickel tax’ imposed last Wednesday by the Lawrence County Board of Education for the purpose of raising new funds for a new elementary school to replace Louisa East and West. 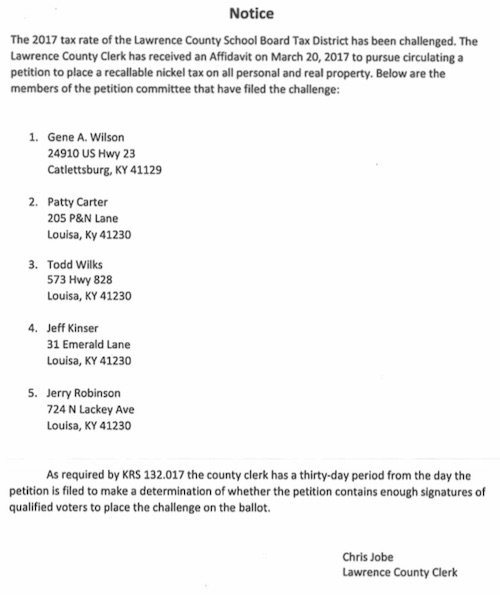 Jobe said the petition will need more than 600 signatures if it is to put the issue on the ballot in a special election this year. The number of signatures required is based on 10% of the number of votes cast in the latest General election.

He said he has 30 days after the petition and the signatures are turned in to his office to set a date for the special election. There is no regular election this year. “This will cost the school board about $30,000 to hold the special election,” Jobe said.

The petition drive will be led by Lawrence Co. businessman Gene Wilson who successfully launched a petition drive to put the wet-dry issue on the ballot in Louisa two years ago. Wilson has said there are other ways to raise money for the new school besides loading all the costs on property owners.

Lawrence Supt Dr. Rob Fletcher said the cost of a new school will be $15 million and the BOE has only $7 million in bonding capacity left after borrowing monies to repair all county schools four years ago. The nickel tax will raise a like amount to match what the BOE can borrow now.

Fletcher also said if the ‘recallable nickel tax’ was not passed this year, it would be 2023 before any school could be built and that many of his contacts in other counties said that the state ‘will not even consider’ a project unless the nickel tax is in place.