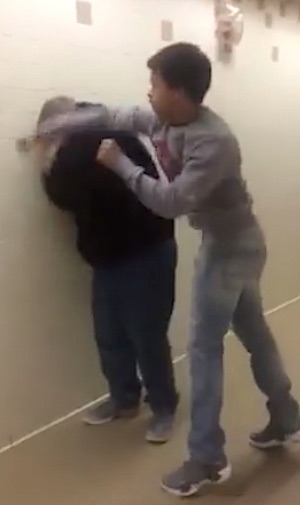 The Bully of Spring Valley High…

(WARNING…Parts of this short video may be offensive to some viewers.)

On Thursday evening at approximately 8:45 p.m. the Wayne County Sheriff received information regarding alleged misconduct by a student at Spring Valley High School. The video sent showed a student abusing another student who did not defend himself.

Upon notification, Sheriff Thompson immediately assigned a deputy to investigate the allegations. The Wayne County Sheriff’s Department immediately contacted Wayne County School Officials and the Prosecuting Attorney’s Office. The investigator for the Sheriff’s Department also contacted the guardian of the victim who advised that the victim had been seen by medical personnel.

School officials advised that the suspect had been suspended pending an investigation.

Sheriff Rick Thompson and the investigator attended a meeting regarding the incident at Spring Valley High School this morning with school officials. The Sheriff and Investigator then responded to the victim’s residence and interviewed the victim. Several witnesses have also been interviewed.

This incident is still under investigation. For further information, contact the Wayne County Sheriff’s Department.

BOARD VOTES 5-0 TO IMPOSE 'NICKEL TAX' ON PROPERTY OWNERS