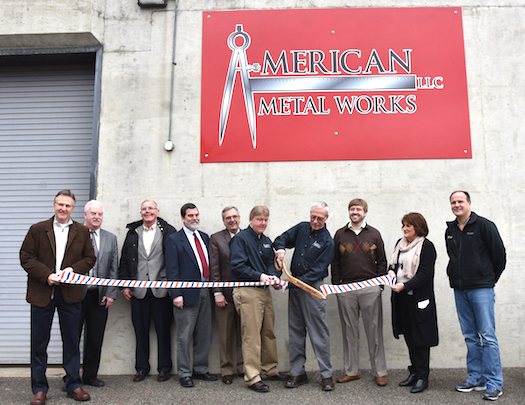 PAINTSVILLE, Ky. – Dennis Rohrer remembers something a friend told him a long time ago.

“The friend said, ‘You only have a short amount of time here, so you got to leave it better than you found it.’”

That adage never rang more true than on Friday, March 17 when American Metal Works held a ribbon cutting and open house at its new location on the Mayo campus of Big Sandy Community and Technical College (BSCTC). 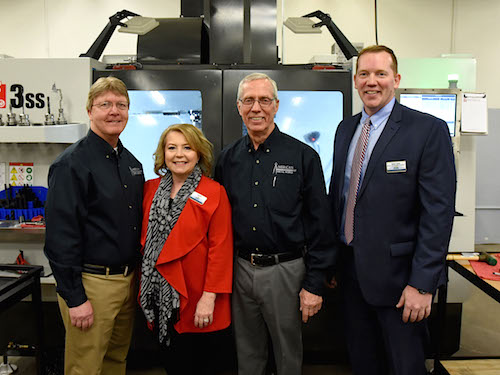 The event, hosted by the college and the Paintsville/Johnson County Chamber of Commerce, was a culmination of months of hard work from Rohrer and James Glass, the co-founders of American Metal Works, and many partners who helped turn this dream into a reality.

“We attended a graduation ceremony that had three Eastern Kentucky residents in the program,” recalled Rohrer. “I remember one of the instructors looking at me and saying, ‘You have the best resources – the people and their work ethic.”

That spawned the dialogue of conversation among Rohrer and Glass, who had suffered from the downturn in the oil and gas industry in eastern Kentucky. They both wanted to make a difference and provide an opportunity for people to be trained and find meaningful work in the region.

“This truly shows the ability and capability of our region,” said Rohrer. The company is leveraging resources such as the eKentucky Advanced Manufacturing Institute in Paintsville to provide a pipeline of highly-skilled employees as the company grows. “I truly believe this is the dawning on a new day for eastern Kentucky.”

Glass told those in attendance that American Metal Works is a “perfect example of how a public and private partnership can improve lives and improve the region.” 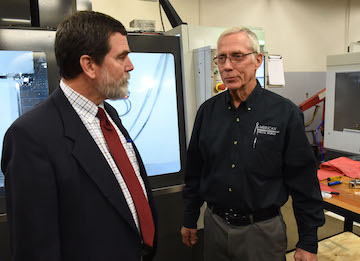 “This marks the culmination of an idea,” added Glass. “How can we keep the talented workforce in the area and create businesses that capitalize on the skills of those displaced from the coal and oil and gas industries?”

Jared Arnett, executive director of Shaping Our Appalachian Region (SOAR) said Rohrer and Glass exemplify the attitude of his organization.

“James and Dennis put a lot on the line and a lot of risk not to make money but to make a difference,” said Arnett. “The reality of this project is that the impact is real and it is real to the people it will serve.”

“We are not just standing in Paintsville,” said Hille. “We are standing on the threshold of the American dream.”

Kelli Chaney, dean of career education and workforce development at BSCTC, said the idea of business incubation builds on the need of entrepreneurship development across the region.

“There’s no better people to address the issues facing us than our people,” she said. “What Dennis and James have been able to accomplish shows the resilience that is at the core of every person from eastern Kentucky. We get knocked down, but we get back up. This incubator is open for business and open to turn the dreams of a better eastern Kentucky into a reality to those who seek it.”

Chaney expressed her gratitude to Danny Tonkin, the director of business and industry at BSCTC, for his work in bringing the idea of a business incubator to fruition.

“It took so many partners to pull this off, but the power of collaboration is a wonderful tool,” she said.