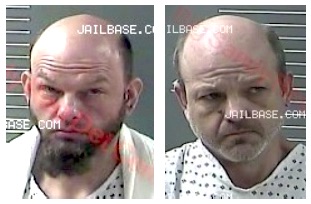 An investigation late Thursday night by deputies from the Lawrence County Sheriff Department resulted in the discovery of a meth drug making operation that led to the arrest of two Louisa brothers.

Broderick N. Cyrus 40, and Joshua Q. Cyrus, 42, both of Louisa, were arrested by deputy Mason Keefer,  and each charged with: • MANUFACTURING METHAMPHETAMINE, 1ST OFFENSE.

Both Cyrus’s have a sizable criminal past, with numerous offenses committed by both men over the years, with Broderick Cyrus having 8 previous arrests in the last 8 years, on a slew of criminal charges, several of which were of a serious nature, including one involving a felony assault of an ambulance EMT personnel in Lawrence County just last year. Joshua Cyrus has been arrested 10 times in just 16 years on multiple misdemeanors and traffic citation charges.

This a developing news story, and the Levisa Lazer staff will provide additional details regarding this case as soon as more information is released.

LAWRENCE CO. FALLS TO PAINTSVILLE ON THE ROAD, 3-1