STORY OF FT. GAY SOLDIER WHO MADE ‘THE ULTIMATE SACRIFICE’ 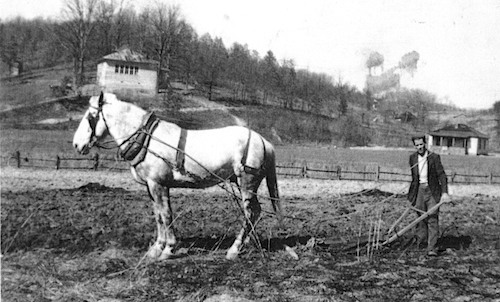 “S/Sgt. Jerry Bartram, a member of (Co. E. 330th Inf.) the 83rd Infantry (Thunder Bolt Division) in France, was killed in action August 9, his wife, Mrs. Jerry Bartram of Fort Gay, has been notified by the war department. Sgt. Bartram was the son of Mr. and Mrs. Edgar Bartram of Fort Gay. He had been overseas since last April and took part in the invasion of (Normandy) France. A (younger) brother, Pfc. Ronald J. Bartram, is serving somewhere in England”.

We were neighbors of the Bartram family (on Sunnyside) and as a child, of (six years old), I sat in our yard and witnessed the sad news being delivered to the Bartram family that Jerry had been killed. The news was delivered by my Uncle, Elwood Raines. He was the father-in-law of Jesse, Jerry’s twin brother.

Jerry was brought back for burial July 13, 1948. His funeral was held at Bartram Chapel and he was buried in the Jay Frasher Cemetery on Mill Creek.

He is pictured plowing the family garden with their horse named “Old Bill”. This would have been shortly before being drafted into the Army on July 10, 1942. He had also worked on the Pennsylvania Railroad and in the 3C camps. The one room Sunnyside School is shown in the background where he attended. The Bartram family home was located two miles south of Fort Gay on Sunnyside, sometimes referred to by some, as “Poor burgh”. Now called Artrip Branch. While growing up, Jerry, his brothers, cousins and neighbors would all get together and play music (Gibson Guitar) as well as baseball.

Jerry was married to Betty Jean Peters, daughter of Welzie & Hazel (Frasher) Peters. When Jerry was killed, Betty Jean was working in Cleveland OH. She, like so many other wives, sweethearts, sisters and even mothers, they were working in the factories building war materials supporting the troops. They were known as “Rosie the Riveters”. I talk to Betty Jean. She is now 91 years old and doing well.

As mentioned above, Jerry was the son of Edgar and Melissa (Holbrook) Bartram. He was the grandson of Jerry L. & Wilda Sue “Wille” (See) Bartram. He was the GG/Grandson of the person now proclaimed “Father of Wayne County” John & Nancy (Webb) Wellman. Research tells me Jerry was also a descendant of four Revolutionary War Soldiers who fought to free this great country. GGG/Grandfathers Bennett Wellman, John See, Capt. David Jarrett and Col. James Graham.

Jerry had three sisters. Anna, Margaret and Juanita and in addition to Ronald & Jesse mentioned above a brother Carl. This Bartram family was one of the most respected families in the area. They suffered many tragedies. Jerry’s two older brothers were killed, prior to his death, on the N&W Railroad tracks. Homer on July 25, 1936 and Claude on May 13, 1943.

We all should step back and reflect on Jerry and the many thousands of young men like him who fought to preserve and protect this great country and who made the ultimate sacrifice for the freedom we enjoy today. There were also so many who did make it back, but some with physical and mental wounds that never healed. World War II was a terrible time in our history. I salute those great veterans that survive today. They are now in their 90’s and are all, about gone.