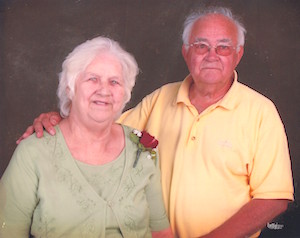 Owen “Shorty” Marcum, 88, of Fort Gay, WV went home to be with the Lord, March 15, 2017 at the Emogene Dolan Hospice House of Huntington.

Owen “Shorty” was born October 20, 1928 in Martin County, KY to the late Walter and Bertha Kirk-Marcum. Owen was preceded in death by his wife of 60 years Patty Ann Frazier-Marcum; a son Elliot Marcum; a daughter and son-in-law Deanna and Billy Caudill; two grandchildren Stephanie Gilkerson and Tori Marcum.

Owen is survived by his children Larry Owen and Sue Marcum, Linda Kay and Mike Gilkerson, Bobby and Lora Marcum all of Fort Gay, John Paul and Lawana of Louisa. Owen is also survived by his brothers Sterling and Lowella Marcum, Darrell and Louise Marcum and Craig and Brenda Marcum and one sister Christine Winfrey. Also surviving are his 16 grandchildren and 23 great-grandchildren and a host of family and friends.

Owen “Shorty” was a lifelong member of the New Friendship Church and a gospel singer with the Travelers Quartet. He sang with many gospel groups through the years. He was retired from the C&O Railroad and the Nickel Plant. He was the owner of his own satellite company for many years and was a Fort Gay Councilman for over 40 years.

Young Funeral Home is in charge of arrangements.

Visitation and Viewing will be held on Friday, March 17, 2017 from 1:00 pm until 11:00 pm at the New Friendship Church at Rock Castle Creek in Martin County, Ky. as well as on Saturday, March 18, 2017 from 12 noon until service time at the Young Funeral Home Chapel.

Funeral Services will be held at 2:00 pm on Saturday March 18, 2017 at the Young Funeral Home Chapel with David Marcum, Tommy Adams and Jacob Marcum officiating. Burial will follow at the Doss Cemetery in Fort Gay.

Online condolences may be left for the family by visiting www.youngfuneralhomeinc.com