Many in eastern Kentucky could lose insurance under new plan 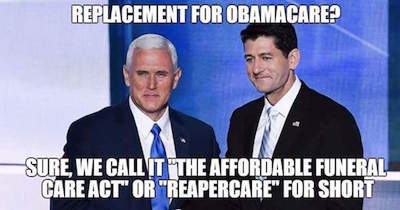 According to the nonpartisan Congressional Budget Office, the agency tasked with providing unbiased analysis of bills for Congress, 24 million Americans too lose their health coverage if the law is passed. Health and Human Services Secretary Tom Price immediately called the CBO estimate “impossible,” but Politico.com is reporting that internal documents from the White House estimate the number would be even higher — 26 million.

Twenty million Americans gained insurance under the Affordable Care Act, also known as ObamaCare, which the AHCA seeks to repeal.

Mountain Comprehensive Health Corporation, which operates eight primary care clinics and 13 school clinics in five of eastern Kentucky’s poorest counties, is still trying to figure out what the law, released last week and just analyzed by the CBO, will mean for it.

MCHC CEO Mike Caudill said it seems to him that much of the authority for implementing the proposed new law would fall to individual states.

“It makes it so much more important what Gov. Bevin does,” Caudill said.

The proposed federal law would cut $880 billion from Medicaid over 10 years, according to the Congressional Budget Office report. The bill would reduce the amount of help most lower income people could get in paying insurance premiums, and change the way those subsidies are given, basing them solely on age rather than on income. Taxes on wealthy individuals and corporations would also be reduced, and the bill includes the repeal of a cap on the salaries of health insurance company CEOs.

“I think as a nation, we have to decide our priorities. Where does health care rank in our list of priorities, and do we as a nation want to help those who can’t help themselves?” Caudill said.

Counties served by MCHC rank in the bottom 100 in the nation in terms of median household income, and two — Owsley and Bell — rank in the bottom five. Caudill said many people who don’t work have multiple health issues and are unable to work because of them. Many on Medicaid do work, but either work part time, or work long hours for low wages and fall under the Medicaid expansion. If they had to pay for medications for the multiple health problems they often face, it would amount to more than their income.

“When you’ve got a $400 a month power bill and thousands of dollars in medications, it’s hard to provide the basics of life,” he said.

A study published in January examining the change in cancer rates from 1980-2014 showed that while most Americans are getting healthier, eastern Kentuckians are getting sicker. Cancer rates in some counties here increased by 45 percent over the course of the study, a result some researchers attribute to smoking, obesity, inactivity and poverty.

MCHC’s Caudill compared the situation to a tornado or a hurricane striking, when local officials call for outside help, the governor and the president declare a disaster area and people rush in to provide help.

“We have a medical disaster area and nobody is trying to announce that and ask for aid and nobody is rushing to our aid,” he said.

MCHC used funds from the ACA to build more services here. The nonprofit company hired about 100 people from doctors to support personnel, largely due to the Medicaid expansion. It added new clinics and new services at old clinics, and saw its program revenue (money earned from providing service) increase nearly 20 percent from the year ObamaCare was passed to the year it fully took effect in 2014, publicly available tax documents show. Program revenue alone for the corporation was $20.6 million in the tax year ending in March 2015, up from 17.2 million in the year ending in March 2011.

Appalachian Regional Healthcare, which runs hospitals and clinics in Whitesburg and 10 other cities in Kentucky and West Virginia, saw its program revenues increase $42.2 million to $594.3 million between its 2011 and 2015 fiscal years. A spokeswoman for the hospital chain did not respond to questions emailed to her about the health care legislation.

RURAL RESIDENTS WOULD SUFFER MOST FROM CHANGES

Under the GOP legislation, which has been speeding through House committees since it was introduced a weed ago, losses would be particularly bad in rural areas, Anna Wilde Mathews and Dante Chinni report for The Wall Street Journal. Nationwide, “a rural 45-year-old making around $18,000 a year would pay about $2,291 a year more on average from his own wallet under the Republican bill than under the ACA, according to the analysis—compared with a $1,588 increase for a 45-year-old urban resident. For 62-year-olds earning about $18,000, the average increases in cost under the Republican bill’s setup were far greater: $9,075 for rural and $6,954 for urban consumers.”

“In extreme cases, the amount a consumer might owe for a plan could exceed that person’s annual income,” the Journal reports. “In Nebraska’s Chase County, a 62-year-old currently earning about $18,000 a year could pay nearly $20,000 annually to get health-insurance coverage under the House GOP plan—compared with about $760 a year that person would owe toward premiums under the ACA,” according to an analysis from consulting firm Oliver Wyman.

“The Oliver Wyman analysis highlights how rural areas, where individual insurance premiums are often higher, could see a major effect from the shift to flat-sum tax credits,” reports the Journal. “Compounding that, rural populations are often older and poorer, so the proportion of those doing worse under the new subsidy setup may be higher. Of the 100 counties where 62-year olds earning around $36,000 would see the biggest jump in annual costs, 97 were rural.”

“People with higher incomes could see their costs go down under the Republican proposal,” reports the Journal. “For instance, a rural 62-year-old making about $54,000 would spend about $2,588 less per year for a plan on average under the Republican bill’s subsidy structure, which gives tax credits to people at higher income levels than the ACA does. The urban 62-year-old at that income level would spend $2,856 less.”

A Post analysis also looked at the 35 counties that could lose the most under the plan, most of which Trump carried, and the 25 counties, mostly urban, where he got the lowest percentage of votes and how many of those counties would be better off under the new plan.

Gary Claxton, a vice president at the Kaiser Family Foundation, told Guo, “It is simply cheaper and easier to provide health care in places with a lot of people. In urban areas, it’s all about being able to negotiate efficient, lower-cost networks. That’s why there’s much more ability to get lower-cost premiums in those areas. In a rural area there’s not really much you can do by negotiating with the few existing providers that are there.”

The complete text of the American Health Care Act can be read online at https://housegop.leadpages.co/healthcare/