Driver reportedly fell asleep at the wheel, luckily escapes with no injuries 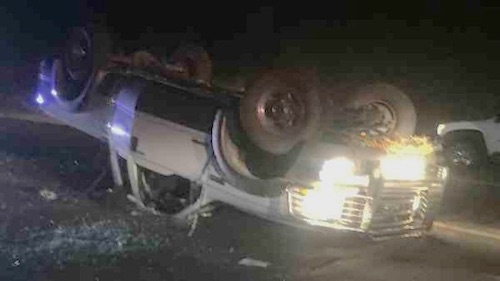 Just minutes after returning from a major gas leak scene that resulted in some evacuations, and from running around for a couple of hours in the biting morning cold of 16 degrees, the cold morning weather since January, the Fallsburg Fire Department once again was sent out for another emergency, call this time a motor vehicle accident just a few miles away.

At just before 6:30 A.M., Lawrence County E-911 received a call of a single vehicle rollover accident on US 23 around 1 mile north of the Kentucky Power Plant.

E-911 dispatched the Fallsburg Fire Department, as well as Lawrence County Sheriff’s deputies to the scene.

Once emergency units arrived on the crash scene, they discovered that a pickup has crossed the median from the north bound lane of US 23, flipped over and landed on its top in the southbound lanes.

The southbound lanes of U.S. 23 were then shut down near the Kentucky Power Plant.

The driver of the wrecked pickup truck told emergency responders that he was traveling north on U.S. 23 on his way to work when he fell asleep, which led to him crashing his truck.

The driver received bumps to his head but didn’t require medical treatment.

The southbound lanes of U.S. 23 remained closed for around an hour while crews removed the wrecked vehicle and cleaned up the crash scene, and the south bound lane was reopened at around 7:30 A.M.

The name of the driver has not been released at this time.