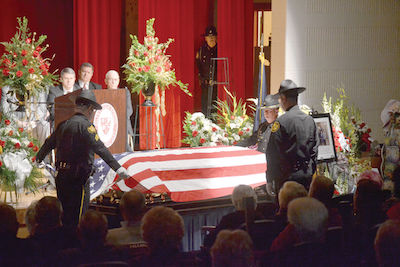 A woman who married former longtime Pike County Sheriff Charles “Fuzzy” Keesee while he was suffering from dementia had him change his will to disinherit his only daughter, the daughter has claimed in a lawsuit.

Mildred Keesee sued Easter May Prater, of Pikeville, last week in Pike Circuit Court, seeking repayment of the money Prater “defrauded” from her, plus punitive damages and an order overturning the will.

Prater’s attorney, Michael de Bourbon, said she denies all the allegations in the lawsuit. Her last name is now Keesee, de Bourbon said.

Charles Keesee was a legend in Pike County politics: He was sheriff for more than 40 years after first taking office in 1962. He lost re-election in the May 2014 primary.

The complaint by Mildred Keesee, 58, said Charles Keesee began suffering dementia in 2014, and that from 2012, he was not mentally competent to handle his financial affairs.

Keesee married Prater in February 2015, even though he wasn’t mentally fit to make that decision, the lawsuit said.

Mildred Keesee said in an interview that Prater barred her from seeing her father, putting a note on the door of her condominium warning her not to knock or call.

Prater took part in numerous fraudulent financial transactions, including converting several of Keesee’s bank accounts to survivorship accounts so she could “fraudulently separate” Keesee and his heirs from his money and property, the lawsuit said.

Mildred Keesee said in an interview that at one point, Prater received $446,000 from two certificates of deposit her father had maintained.

Mildred Keesee estimated that her father’s estate would have totaled $1 million.

Prater used “undue influence” on Charles Keesee to put a new will in place in May 2015 that disinherited Mildred Keesee and her three children and two grandchildren, the lawsuit alleged.

Mildred Keesee said the new will noted her father’s love and affection, and left her $1. The document left $1 each to her three sons and nothing to her grandchildren, Keesee said.

Charles Keesee would never have done that if he was mentally competent, the lawsuit said.

Mildred Keesee had worked for her father at the sheriff’s office, said Prestonsburg attorney Ned Pillersdorf, who represents Keesee.

“She was very close to her father,” Pillersdorf said.