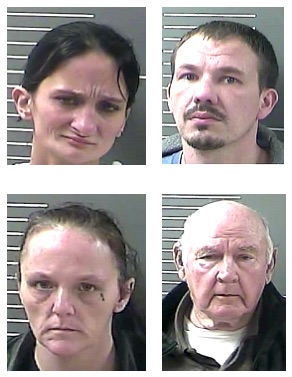 INEZ, Ky. –Citizens of Martin County are reportedly in angered disbelief after word spread in recent days of a pair of men and women who have been charged in two separate high profile cases with serious and brutal child sex abuse charges in the past 10 days.

Two men and two women were indicted for numerous count charges of child sex abuse this month in Martin County.

In the more recent case, according to a press release from the Kentucky State Police Post 9 in Pikeville, 36-year old Paul Thomas Mullins of Warfield, and 28-year old Heather Cline of Paintsville were both arrested on the indictment warrants out of Martin County by the Paintsville Police Department on March 7.

Paul Thomas Mullins, who was also served with two outstanding bench court warrants during his arrest, has a sizable criminal past, having been previously arrested 11 times in the past 12 years, of which 8 of those arrests were in just the past two years, for around 26 mostly misdemeanor criminal charges, in Martin Johnson, Lawrence, and Pike counties.

Heather Cline has a smaller criminal history, with one arrest in 2015, and two in 2016, on six criminal charges, of • WANTON ENDANGERMENT-2ND DEGREE, • ENDANGERING THE WELFARE OF A MINOR, • ASSAULT, 4TH DEGREE (MINOR INJURY), ALCOHOL INTOXICATION IN A PUBLIC PLACE (1ST & 2ND OFFENSE), • THEFT BY UNLAWFUL TAKING OR DISPOSITION SHOPLIFTING UNDER/$500, and • DISORDERLY CONDUCT, 2ND DEGREE. Cline plead guilty to those charges in early November 2016, and served a short jail sentence thereafter.

Both Paul Thomas Mullins and Heather Cline have been lodged in the Big Sandy Regional Detention Center since their arrests, having been denied bail bonds, and are scheduled to be arraigned in Martin County Circuit Court on March 16th.

In the second child sex abuse case from earlier this month, for which some reason there was no public press information released by either the Kentucky State Police or Martin County Sheriff Department, a elderly Martin County man with no apparent criminal past was arrested on child sex abuse charge, along with a notorious Martin County woman with a massive criminal history, was smacked with criminal child sex charges.

Edwin A. Moore, 77, of Lovely, Kentucky, and Marlene A. Evans, 39, also from Lovely, were arrested by both the Martin County Sheriff Department and Kentucky State Police on March 3.

Marlena Evans has a seriously egregious criminal record, having been previously arrested at least 41 times, maybe more, in the last 15 years, on over slightly 100 criminal charges, including extensive number of felonies, which include multiple felony assault charges on police officers separate arrests for 1st degree assault and 2nd degree assault, and felony escape, to name a few.

Moore and Evans remain incarcerated at the Big Sandy Regional Detention Center on no bail bonds. Their arraignment date has is unknown at this time.

The four arrests cases in Martin County on child sex abuses are just a piece of the onslaught of pedophilia, child sex trafficking, and child pornography suspects that have been arrested in the U.S. in just over the last seven weeks, approaching nearly 2,000 pedophile arrests across the nation since January 20, which have included:

On Jan. 27 authorities arrested 42 in a human trafficking operation in Tennessee.

On Jan. 29 authorities announced that 474 were arrested in a statewide California human trafficking operation and 28 sexually exploited children were rescued.

178 people were arrested in Texas for sex trafficking in sting that operated in January until Super Bowl Sunday.

On Feb. 14 the Polk County, Florida sheriff announced that 42 were arrested in Florida in child pornography related cases.

The numbers are “staggering” when compared to the less than 400 sex trafficking-related arrests made in 2014 according to the FBI.

STAND UP FOR YOUR PUBLIC SCHOOLS, KENTUCKY