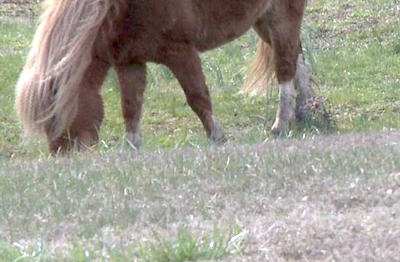 MARTIN COUNTY, Ky. (WYMT)- A Martin County family said they couldn’t believe their eyes after they say they saw their neighbor shoot a horse.

Mary Maynard and her mother said they saw the horse fall down a hill where it laid for about 30 minutes.

Maynard said she saw the neighbor then tie a strap around the horse and drag it up the hill where she says her neighbor shot it once more.

Police said the horse, which belongs to a home down the road, was shot multiple times and found dead on the back of the neighbor’s property.

Maynard said the sight was so awful she had trouble sleeping last night.

“I just, I was in shock because I’ve never seen anybody do anything like that,” Maynard said.

Sheriff John Kirk said others have come forward saying this isn’t the first time something like this has happened.

He said there’s better ways to deal with an animal that comes on to your property.

“You should either call the sheriff’s department and let them know that they’re there or or call the animal owner instead of taking the law into your own hands,” Kirk said.

(Editor’s Note- I saw a FB message from my friend and former student Shaunda Crum last week describing what I suspect is the same incident reported by WYMT above. But she said Sheriff Kirk’s deputies came to the scene but said since they didn’t see it happen, they couldn’t make an arrest.)