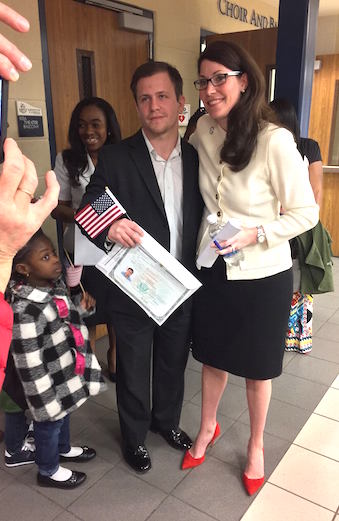 The official proceeding included the administration of the oath of citizenship required to become Americans at Grimes’ alma mater, Lexington Catholic High School. Grimes spoke to the new citizens and their families about the duties of civic engagement, voter participation, and commitment to improving Kentucky.

Grimes encouraged the new citizens to register to vote online at GoVoteKY.com and to take part in efforts to restore trust in media and institutions.  The 2016 Civic Health Index found that Kentucky ranks 48th in the nation, declining more than 10 percent in three years. Grimes is hosting roundtables across the state to engage Kentuckians in conversation on building involvement and engagement among citizens.

The Secretary of State’s staff attend each naturalization ceremony held in Kentucky to greet new citizens and answer questions regarding voting and registration. Grimes recently welcomed more than 150 new citizens at last year’s WorldFest in Louisville, one of the country’s largest international festivals.