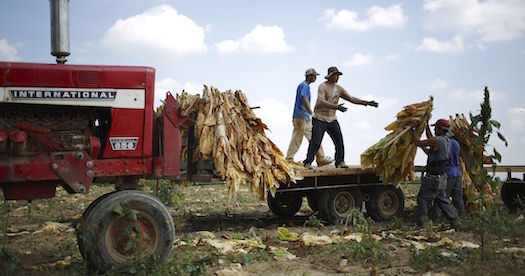 By Anna Baumann
Special to KyForward

Undocumented immigrants living in Kentucky pay $36.6 million in state and local taxes each year, according to a new report from the Institute on Taxation and Economic Policy. These substantial tax contributions should be acknowledged as lawmakers consider the economic and social impact of immigration policy and enforcement in the U.S. – including a recent executive order that expands the groups of immigrants prioritized for removal and a surge in deportations that involved 53 arrests in Kentucky, many of the detainees lacking criminal records and others with only minor offenses.

At an effective state and local tax rate of 6.9 percent, undocumented immigrants in Kentucky are actually paying more as a share of family income than the wealthiest 1 percent of all Kentuckians who pay only 6 percent.

Their robust annual contributions are comprised of an estimated:

— $5.2 million in property taxes. Kentucky’s undocumented immigrants have an estimated homeownership rate of 21 percent and they also pay property taxes indirectly when landlords pass costs through in rent.

— $20.1 million in sales and excise taxes. Immigrants living, working and raising families in the Commonwealth are subject to taxes on gas, clothes, electronics and other items.

Undocumented immigrants’ substantial tax contributions in Kentucky would increase an additional $16.1 million (for a total of $52.7 million) under comprehensive immigration reform that provides a pathway to citizenship. The majority of the increase – $13.5 million – would come from income taxes.

Not only would legal status provide a conduit for full compliance with income tax laws, but it would also improve immigrants’ earning power through increased access to jobs, education and skills development.

Across the U.S., undocumented immigrants pay an estimated $11.7 billion in state and local taxes toward their local schools, road and bridge repair, public safety, libraries and more. That contribution would rise by $2.2 billion under comprehensive immigration reform.