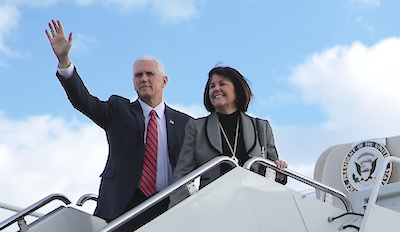 (Date: 03-09-2017) One day after denying claims that President Donald Trump was coming to Louisville this weekend, White House officials said that the vice president is planning to come to the city.

Vice President Mike Pence will travel to the Louisville area on Saturday to discuss health care and the economy with Kentucky Gov. Matt Bevin, according to his office. More details about the visit are expected to be released later Thursday.

On Wednesday, a Louisville Regional Airport Authority spokeswoman said that officials were told that Trump was preparing a trip to Louisville. A White House source said late Wednesday night that the president was not planning a trip to Kentucky and that more details of his schedule would be released later this week.

Pence’s visit comes as Kentucky Sen. Rand Paul is among the conservative lawmakers who have criticized the House GOP bill to overhaul the Affordable Care Act, saying it doesn’t do enough to dismantle the law.

On Tuesday, Trump adviser Kellyanne Conway appeared on 840 WHAS radio and criticized Sen. Rand Paul for his opposition to the proposed repeal-and-replace effort, which he says doesn’t go far enough. Later that day, Trump tweeted, “I feel sure that my friend @RandPaul will come along with the new and great health care program because he knows Obamacare is a disaster.”

Paul spokeswoman Kelsey Cooper said late Wednesday night that Paul would be happy to welcome Trump to Kentucky. In an interview with Fox News, Paul said he has heard the rumors of Trump’s visit, and “he’s very popular in our state.”

Republicans have a slim margin in the Senate and will have a difficult time crafting health care legislation that can satisfy both conservatives and moderates. If three Republican senators oppose the bill, united Democratic opposition can stop it.

Pence has made multiple media appearances and meeting with lawmakers to shore up support for the legislation, which is opposed by major health care groups such as the American Medical Association and the American Hospital Association.

By Justin Sayers
The Courier-Journal 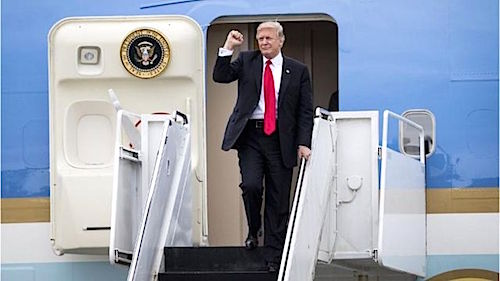 (Date: 03-08-2017) President Donald Trump is coming to Louisville on Saturday, a spokeswoman with the Louisville International Airport confirmed.

On Wednesday, the Federal Aviation Administration warned pilots to expect “VIP Movement” flight restrictions of about 35 miles and an even stricter restriction of about 11 nautical miles, a previous characteristic of a presidential visit. A more-detailed “Notice to Airmen” has not yet been issued.

A similar VIP Movement notice was issued last weekend for Orlando prior to Trump spending time at Mar-a-Lago resort in Palm Beach.

Stephanie Smith, public relations manager for the Louisville Regional Airport Authority, told the Courier-Journal that they were notified Wednesday that he’s coming this weekend. She said that they haven’t received any other details.

Representatives from the U.S. Secret Service in Louisville and Senator Mitch McConnell’s office declined to comment, forwarding all requests to the White House. The White House told a USA TODAY reporter that they could not confirm that he’s traveling this weekend.

The confirmation of Trump’s visit comes one day after his advisor, Kellyanne Conway, appeared on 84 WHAS radio to call attention to Senator Rand Paul’s criticism of the proposed repeal-and-replace of the Affordable Care Act. Later Tuesday, Trump tweeted, “I feel sure that my friend @RandPaul will come along with the new and great health care program because he knows Obamacare is a disaster.”

A spokeswoman for Paul did not immediately respond to a request for comment.

Linda Greenwell, a real estate agent and Louisville Trump voter, said she’ll likely be among big crowds of supporters in a state that overwhelmingly voted Republican in the election.

“He needs to address both his supporters and the ones doing everything in their power to make him not succeed,” she said. “He’s everybody’s president.”

Chris Rowzee, a spokeswoman for Indivisible Kentucky, a Louisville-based political organization that opposes Trump and his agenda, said the group was “going to make every attempt to ensure our voices are heard” during the visit, which may include demonstrations.