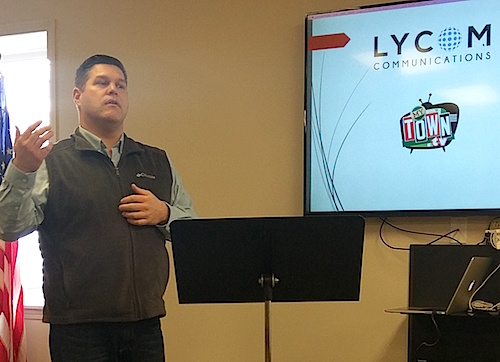 The Louisa Rotary Club gathered for the weekly meeting Thursday March 2, 2017. It began with the traditional prayer, Pledge of Allegiance, and 4 Way Test. Birthdays for Debbie Cordle and Steve Lycans were recognized.

In Rotary News, Tommy and Ellen Taylor announced that their son Austin Taylor raised $986.00 to ensure his spot in the UK Dance Blue event. The event began in 2006 to raise money for improving the Pediatric Outpatient Clinic at the Kentucky Children’s Hospital. Only the top 1,000 fundraisers get to participate in the event. The 24 hr dance-a-thon raised $1,785,286.96 for children in 2017.

Lawrence Co. Supt. Dr. Rob Fletcher announced that Timmy Dalton was the number one high school basketball scorer in the nation and scored the 4th most points in the history of the US. He expressed how proud he was of the boys and girls Bulldogs basketball teams.

The speaker for the week was Steve Lycans of Lycom Communications. They are upgrading broadband capabilities, security systems and offering their customers more options.