BULLDOGS COME UP SHORT IN ‘BARN BURNER’ WITH JOHNSON CENTRAL

PIKEVILLE, Ky. —  In an absolute epic 15th Region semifinal game Saturday night Johnson Central (27-6) escaped with an 88-87 win against defending champion Lawrence Co. (22-12) in front of 4,500 fans at the East Ky Expo Center to advance to the title game on Monday night. 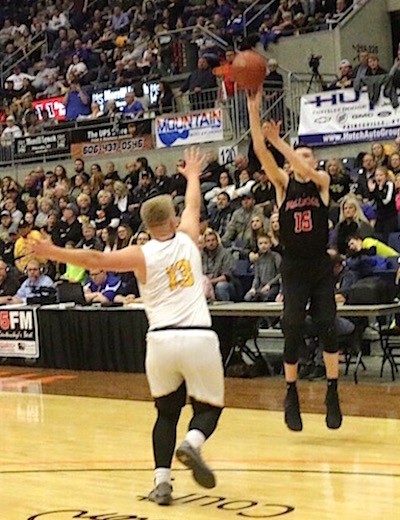 In the previous three meetings this season Central has stormed out of the gates and made the Dawgs play catchup, but this time three Trey Dalton three pointers kept LC within striking distance and the Bulldogs fought their way all the way back to lead 23-22 at the end of one period. 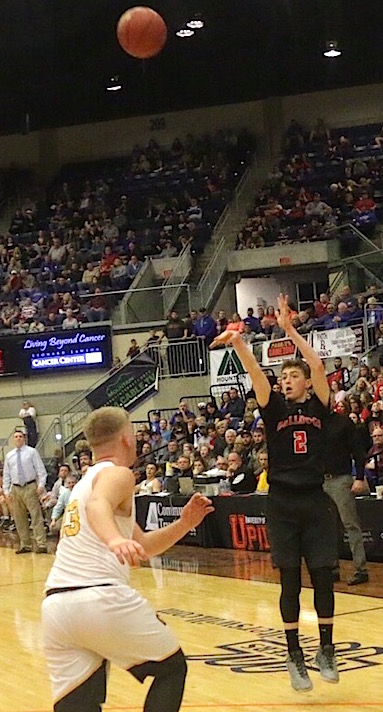 Johnson Central looked like they were going to run away with it in the 2nd quarter when they took their biggest lead of the game at 38-29 with 3:18 to go, but a 9-0 run led by Tyler Maynard allowed the Dawgs to tie it up at 38 late in the quarter.

With 18 seconds to go before the half LC senior star Tim Dalton picked up an offensive foul, then was assessed a technical foul along with Jacob Rice of Johnson Central for Dalton’s second and third fouls of the half which would prove crucial in the second half. Johnson Central led 43-38 at intermission.

In the third period Lawrence Co. came out like gangbusters raining threes from all over the Expo Center floor to take an 11 point lead with 1:38 to go in the period. Central battled back and got a three pointer at the buzzer to cut the lead to 68-63 going into the final stanza. 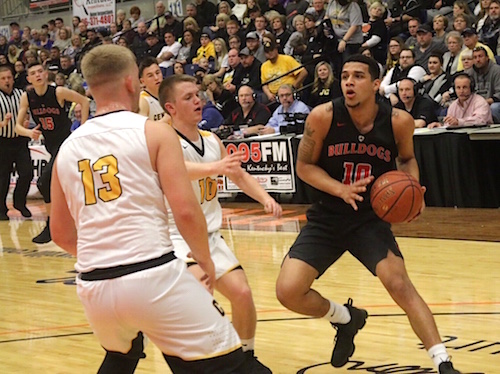 With most of the estimated 4,500 fans on their feet,  this game went right down to the final horn as Central picked up the intensity and the young pups from Lawrence Co. hanging right with them.

Freshman Chase Sartin hit 1-2 free throws to give the Dawgs an 87-86 lead with under a minute left. 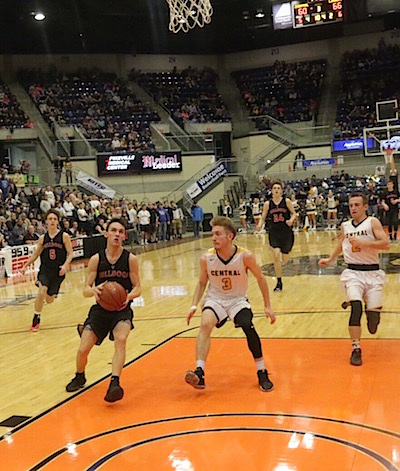 JC guard Cole Crace drove the length of the floor and drew a foul on Dalton with 40 seconds left to foul Dalton out and shoot two shots for the lead, Crace missed both and Central had to foul.

LC’s Dalton missed two free throws and JC senior scorer Mason Blair gave the Golden Eagles a one point lead with 25 seconds to go. After a Bulldog timeout, Jared Wellman had the ball at the top of the key as he went to make a move it looked like he was fouled, but the three men in stripes thought otherwise. As Wellman regained his balance and continued toward the basket his shot attempt with 2 seconds left fell short and the Dawgs season came to an abrupt end and Johnson Central breathed a sigh of relief.

Lawrence Co. placed four in double figures as Dalton finished with 28 points, 10 rebounds and 5 assists in his final game in a Bulldog uniform and his illustrious five year career come to an end.

Johnson Central had three in double figures led by Mason Blair with 40 points on 14-35 shots and 3-15 from three, Cole Crace finished with 16 points, Austin Davis hit 4-5 from long range for 12 points, Jacob Rice tallied 8 points, Dalton Collins had 7 points, Gabe Farrell chipped in with 5 points. The Golden Eagles shot 31-69 from the field, 14-24 from the line and 12-31 from three point land.

Johnson Central will meet Pikeville who defeated South Floyd 82-75 in the other semifinal on Monday night in the Championship game.

Johnson Central advances to their 6th straight regional final under Head Coach Tommy McKenzie (15th overall). Only two other schools in 15th region history have been to six straight (Virgie and Pikeville). Virgie did it under two head coaches (won 5 of 6). Pikeville did it under coach John Bill Trivette (won 4 of 6).

“… Hardest part about it is we have a winning effort and put together a great game plan, executed the way we wanted, but just came up on the losing end.”

“…Got a great group of boys, enjoy coaching them, love them all. Losing two seniors gonna be tough, they all left it out on the court.”

“…We set the tone early that we weren’t going to back down and that we were going to fight all game long.” I told them at halftime that we had a great opportunity to win this game to keep taking it at them and boy did they. Just came up short.”

“…We overachieved in every way and this group has come a long way from the start and I couldn’t be more proud of them.” Gonna miss Cameron Maynard and Tim Dalton a bunch. They both have had great years, Cameron waited his turn and played great tonight. Tim has been our leader all year and I can’t say anything that hasn’t been said all year. He has grown so much as a person and a player. Both will be successful in life.”