GOV. BEVIN DECLARES STATE OF EMERGENCY IN RESPONSE TO THIS WEEK’S SEVERE STORMS 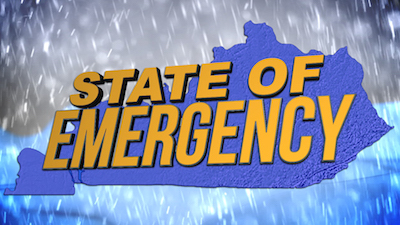 A powerful weather system with torrential rain, hail, flash flooding, straight-line winds, and tornadoes tracked across the Commonwealth on Tuesday (Feb. 28) and Wednesday (March 1), resulting in injuries and significant property and infrastructure damage.

“Communities throughout Kentucky were affected by this week’s severe storms,” said Gov. Bevin. “This official declaration gives our emergency management personnel the resources they need to proactively respond to local needs. We sincerely appreciate their hard work and the dedication of all our first responders and local officials this week.”

Kentucky Emergency Management (KYEM) has received preliminary notification of damages from more than three dozen counties, and officials are currently in the process of conducting formal damage assessments.

The emergency order triggers several consumer protection measures and will remain in place for 30 days, but may be extended past that time as needed. This order ensures that any instances of price gouging—including for generators, building supplies, chainsaws, hotel rooms and other necessary goods and services at an exorbitant price in a time of disaster—will be fully prosecuted and held accountable.