DAWGS MOVING ON TO SEMIS AFTER WIN OVER ALLEN CENTRAL 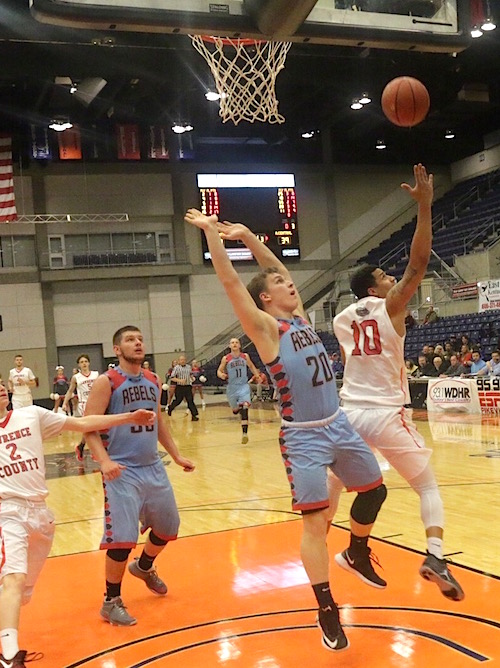 Pikeville, Ky. — The defending 15th Region champion Lawrence Co. Bulldogs (22-11) shot past Allen Central ( 14-19 ) by the score of 85-76 in the first round of the 15th Region tournament Wednesday night in Pikeville at the East Ky Expo Center.

It was a tight first quarter as both teams came out of the gate firing and looking to play fast. Jared Wellman and Tim Dalton had 11 and 10 points respectively as the Dawgs led 21-17 at the end of one period.

In the second quarter Lawrence Co. extended the lead even though Dalton left the game after picking up his third foul with 2:18 to go in the half as Alex Ratliff came off the bench to score 8 points in the first half and Trey Dotson who was battling foul trouble as well, scored 8 points and hit two big three pointers in the period as the Bulldogs led 44-36 at intermission. 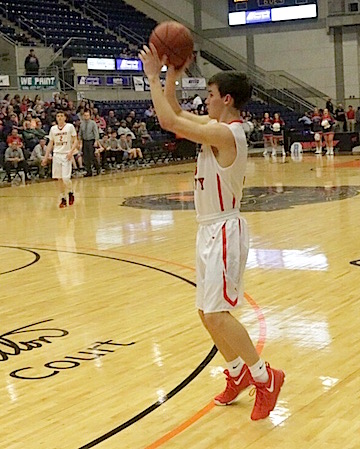 To start the third quarter the game changed as Allen Central packed inside the lane on defense to limit dribble penetration.

LC just held it out front dribbling, daring the Rebels to guard them and when they did Dalton sliced in between two defenders and found Dotson in the corner for a three pointer as the Dawgs ran off 2:20 of the third period.

On the next possession Dalton found Wellman who swished a three and the Bulldog faithful roared with excitement as LC outscored Allen Central 10-7 in a low scoring period to lead 54-43 going to the final stanza.

In the fourth the game really picked up as Allen Central changed to a full court press and Lawrence Co. built a 14 point lead the biggest of the contest.

The Rebels got some timely three point shooting and outscored the Bulldogs in the quarter 33-31. The Rebels pulled to within four points late in the game but 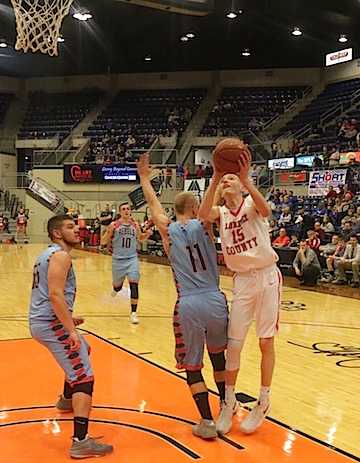 Dalton, Wellman and Ratliff hit free throws late to push the lead back out and secure a spot in the Region semifinals for the fourth straight season for the Bulldogs.

It was also the last game in school history for Allen Central after 44 years as they will consolidate with South Floyd this fall.

The Bulldogs placed four in double figures as Dalton messed around and got a triple double with 35 points, 10 boards and 10 assists. 8th Grader Jared Wellman had 21 points including 4-7 from three point range, Junior Trey Dotson went 5-6 from three and scored 17 points, Freshman Alex Ratliff came off the bench and tallied 10 points, Senior Cameron Maynard scored 2 points, Freshman Tyler Maynard had 6 rebounds and 4 assists.

Lawrence Co. will play Johnson Central ( 26-6 ) on Saturday at 7:00 in the semifinals after the Golden Eagles smashed Shelby Valley 79-43 in the first game Wednesday. JC has beaten the Dawgs three times this season 93-78 in Louisa, 75-73 at Raceland and 97-64 in Paintsville. This will also be a rematch of the last two Region championship games.

“… We knew Allen Central wasn’t going to quit when we got the 14 point lead, gritty bunch who are well coached and playing their last game in school history. We knew it was going to be a battle to the end.”

“…Thought our kids stepped up and hit some big shots and played well offensively, not so well on defense. Alex Ratliff off the bench, Trey Dotson and Jared Wellman knocking down three’s.” Saturday night will be a tough one we have to limit turnovers vs Johnson Central.”

“… Knew we would get their best game and they really put it to us in the boards 39-23 and that kept them in the game. We have to do a better job against Johnson Central on Saturday.”

“…Jared, Trey and Alex all came up big knocking down shot after shot, those guys have grown up so much they don’t even look like the same guys from preseason. Awesome to see how much they have grown.

“…Some anxious moments at the end but we held on and are moving on. We get another shot at Central and this time we have to really limit turnovers they killed us in the road the last time we played getting easy buckets. Can’t wait for Saturday night.”

“… I knew after I hit the first one I had to keep shooting and felt like I was hot. They kept feeding me and I was fortunate enough to knock them down. Timmy makes it easy for us.  He gets us open when he gets in the lane and the defense collapses on him.”

“…In warm ups I felt really good about my shot and to hit the first one of the game really calmed me down, I was just trying to get to an open spot and I knew Dalton would find me like he has all her long.” Little bit of nerves to start but that all went away pretty quick and it was just basketball after that.”

Poll finds most Kentucky adults have access to healthy food, but don’t take advantage of it