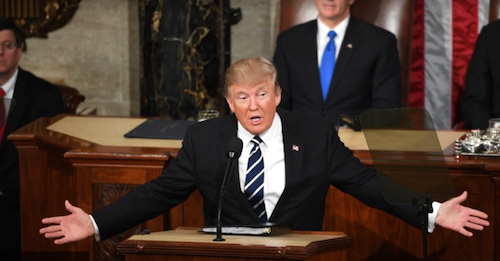 President Trump’s address to Congress Tuesday night contained plenty of factual errors. We only have room here for a few fact checks. If you want to re-publish them, we encourage you to look at reports from The Washington Post, The New York Times, NBC News, PolitiFact.com and FactCheck.org.

NBC’s Chuck Todd, Mark Murray and Carrie Dann write on First Read that Trump’s biggest whopper of the night concerned the economy when he said: “Ninety-four million Americans are out of the labor force. Over 43 million people are now living in poverty, and over 43 million Americans are on food stamps. More than 1 in 5 people in their prime working years are not working. We have the worst financial recovery in 65 years.” NBC says while some figures are true “others are highly misleading.”

For example, 93 percent of people not in the labor force say they don’t want a job. David Freedlander of The Daily Beast noted on Twitter that of the 94 million not working, 44 million are retired, 15.3 million are disabled. 13.3 million are taking care of a family member and 13.2 million are in school.

The Times and Post both say Trump “cherry-picked” data on the economy “to reinforce his argument that he’s walking into the White House with the economy in a near-shambles, as Philip Bump of the Post writes. Trump’s description of “the worst financial recovery in 65 years” is true, Bump writes,m but “we also had the worst economic situation since the Great Depression.” NBC noted that Trump failed to mention that he inherited a country with a low unemployment rate of 4.8 percent and rising household income.

Pipelines: Trump said the Keystone and Dakota Access pipelines will create “tens of thousands of jobs.” Times reporter Coral Davenport noted that most of the jobs will be temporary: “A 2014 State Department environmental review estimated that Keystone would support 42,000 temporary jobs over its two-year construction period — about 3,900 of them in construction, the rest in indirect support jobs, such as food service. It estimated that Keystone would create about 35 permanent jobs.”

Trump also said, “I’ve issued a new directive that new American pipelines be made with American steel.” Post fact-checkers Glenn Kessler and Michelle Ye Hee Le write, “Workers in Arkansas have already built about half of the high-strength line pipe needed for the project, some 333,000 tons. TransCanada said in 2013 that it had already purchased all of the steel pipe it needed for the Keystone XL, with the rest coming from a Russian-owned plant in Canada, Italy and India. Experts say the plant in Arkansas (owned by an Indian company) is the only one in the U.S. that could build the pipe—and it gets its steel from India.”

Immigration: Trump said, “By finally enforcing our immigration laws we will raise wages, help the unemployed, save billions and billions of dollars and make our communities safer for everyone.” Kessler and Lee write, “Trump exaggerates the impact of illegal immigration on crime, taxpayer money and jobs. Extensive research shows noncitizens are not more prone to criminality than U.S.-born citizens. The vast majority of unauthorized immigrants are not criminal aliens or aggravated felons.” Several studies have shown that immigrants are less likely to commit crimes than people born in the U.S., Richard Perez-Pena reported in January for the Times.

Health care: Trump said, “Obamacare premiums nationwide have increased by double and triple digits.” Times reporter Robert Pear notes that double-digit increases in premiums have been common for many years. “President Trump cited Arizona’s 116 percent increase; it is the only state that experienced a triple-digit hike. Premiums for a popular group of health plans sold on HealthCare.gov rose this year by an average of 25 percent, according to the Obama administration. While subsidies are available to people with low and moderate incomes, people who do not qualify for financial assistance must bear the full cost.”

Jobs and trade: Trump said, “We’ve lost more than one-fourth of our manufacturing jobs since Nafta was approved.” Times reporter Binyamin Appelbaum writes, “The U.S. has lost a lot of factory jobs since 2000, but the biggest reason is technological progress, not foreign competition. America’s manufacturing output is at the highest level in history—it just doesn’t take as many workers to make stuff anymore. Some jobs have been lost to foreign competition, but studies assign a modest role to NAFTA.”

Coal: Trump said he ended a regulation that threatened “the future and livelihoods of our great coal miners.” Davenport writes, “There is no evidence that the rule threatened a significant number of coal mining jobs, or that rolling it back will create new ones. No credible studies have shown that rolling back major regulations on coal pollution will contribute to a major increase in coal-mining jobs.”
Written by Tim Mandell Posted at 3/01/2017 12:35:00 PM