LOUISA, Ky. — One person is dead and another flown to a Huntington hospital after a tractor-trailer collided with a car Sunday afternoon.

By Tane’ Mosley and Wade Queen

Lawrence County Emergency Management director Mike Woods stated that a call came in to 911 at approximately 4:30 p.m. of a collision between a car and a tractor trailer. The tractor trailer was driving north on US 23 near the intersection of Highway 3 when, police say, the truck hit a Buick Lesabre on the passenger side as it was driving north on Highway 3 sending it off the road into a utility pole.

The occupants of the car were Lenwood Howell, 61,  from Louisa Kentucky, who was was flown to St. Mary’s for a head injury and possible internal injuries and Cora Howell, also 61, was taken to TRMC where she was pronounced dead.

There is no word on Mr. Howell’s condition this morning but it was reported as critical late last night.

Louisa Police Department stated that the accident was caused by the tractor trailer driving through a red light. The driver was cited for that and the accident is still under investigation.

“The investigation continues with the fatality collision that occurred on Sunday afternoon. Once it is completed, all evidence will be taking to the Commonwealth Attorney,” LPD chief Greg Fugitt said. 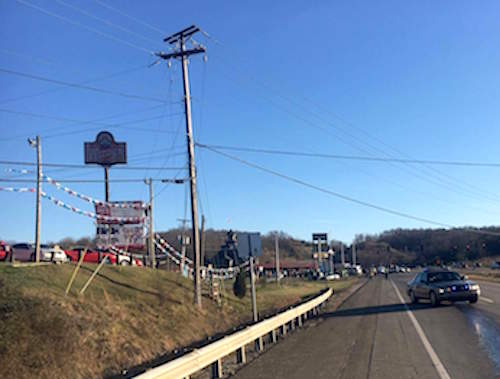 “…The 2013 Freightliner tractor and trailer was traveling North on US 23 approaching the intersection of HWY 3. The 2000 Buick Lesabre was traveling on North HWY 3 towards Louisa.

The tractor trailer collided with the passenger side of the passenger car in the North bound lane of US 23 causing the car to go off the road and come to a rest against a utility pole.

The driver of the passenger car, Lenwood Howell was flown by Health Net from the scene to Saint Mary’s Hospital for a head injury and possible internal injuries. The passenger of the car was transported by Net-Care ambulance to Three Rivers Medical Center where she was pronounced deceased.

The driver of the Tractor Trailer, Adrian O. Turner, 41, of Buffalo, NY did not have any injuries and refused treatment.

During the preliminary investigation it was determined that the tractor trailer ran a red light causing the collision. Turner was cited for Disregarding a Traffic Control Device. The collision still remains under investigation.”