Louisa, Ky. — For the third straight season and final time before moving to the 58th the Lawrence Co. Bulldogs ( 21-11 ) are 60th District champions after routing Belfry ( 14-17 ) on Friday night 71-53 in front of a huge and loud crowd at the Dawg House in the finals of the Boys 60th District Tournament. 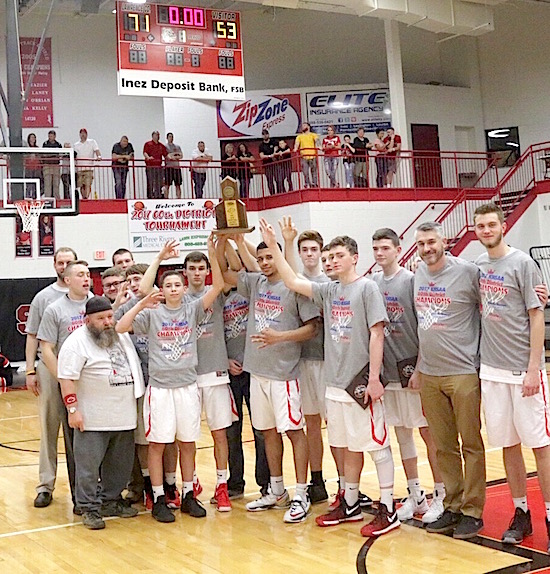 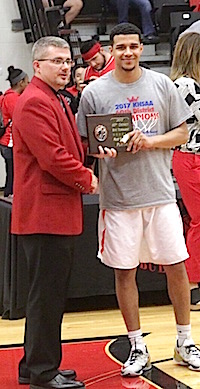 Tournament MVP Tim Dalton led the Dawgs with 28 points as Lawrence Co. started fast and never looked back after a 20-11 first quarter lead. All five LC starters scored in the first period. In the second quarter the Bulldogs extended their lead to 36-25 at intermission.

In the third period the Dawgs kept Belfry at bay behind huge buckets from Trey Dotson, Jared Wellman and Tyler Maynard as Lawrence Co. led 52-40 going to the final stanza.

Belfry tried to extend full court pressure in the final period and the Dawgs burned them time after time which led to easy baskets which extended the lead as LC cruised to the District championship for the third straight season.

The Bulldogs had three players in double figures as Jared Wellman tallied 17 points and Tyler Maynard finished with 12 points to go along with Dalton’s game high 28, Trey Dotson chipped in with 8 points and Cameron Maynard had 6 points. The Dawgs went 14-22 from the line and hit 7 three pointers.

Belfry was led by Isiah Roblee with 21 points and Austin Woolum with 10 points.

Lawrence Co. has been in the 60th District for three years and have been Champions every year. The Dawgs will be moving to the 58th this coming fall.

All five Bulldog starters made the all 60th District team based on regular season play. 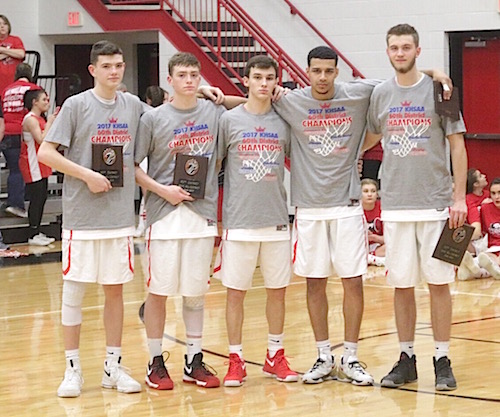 Both teams will move on to the 15th Region tournament beginning next Wednesday and Thursday at the Pikeville Expo center. Lawrence Co. is the reigning 15th Region Champions.

The tournament draw will be Saturday morning at 10:00. Look for the region preview early next week.

“… We put in such a good defensive effort the last two games and that has really been the difference, maybe our best two of the year back to back. Hopefully we can carry that on to next week.”

“…I really think our young guys have grown up over the year. They are not 8th Graders and Freshmen any more this late in the year. Those guys played relaxed and they know their role and it has really shown the last part of our season. They know how hard you have to play every possession in postseason play.”

“… It’s been a crazy ride,  everyone doubted us because of the young players we had coming back. They said you guys can’t win District again and look what we did tonight three peat baby.” The Belfry student section was really on me and I love it, makes me play that much better.” We got off to a great start and really executed the game plan to perfection, the young pups really stepped up and hit some big shots.” 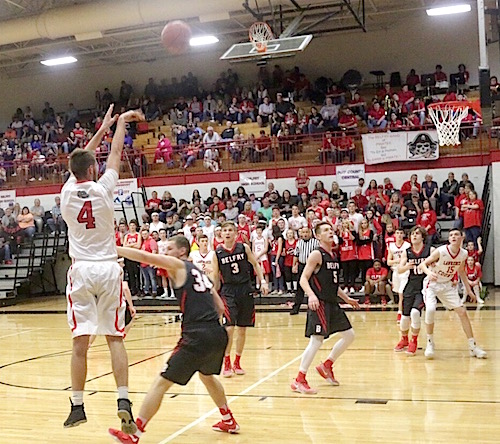 “… Awesome feeling to be here right now, a lot of people doubted us coming into the season and we had our ups and downs but we put it together tonight and we are three time 60th District champs.” I had to help lead this year try to help with the young kids and get them in the right direction and they have been great teammates throughout the season.” Start of the game was a little nervous but this crowd was top notch all week long.”