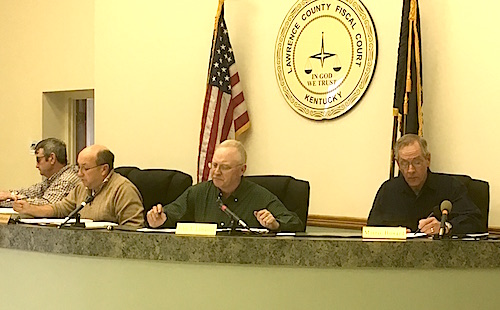 The Lawrence Co. Fiscal Court met for its monthly meeting on Tuesday, February 21, 2017. The meeting was called to order after the pledge and the opening prayer.

Several items on the agenda were approved by unanimous vote.

*  Motion by John J Lemaster, second by Earl Boggs to approve the minutes of the January 24th meeting.

*  Motion by Rick Blackburn, second by John Lemaster to approve the !st reading of the Budget Amendment

*  Motion by Earl Boggs, second by Rick Blackburn to approve the bills for the month

*  Motion by Earl Boggs, second by John Lemaster to appoint Brenda Hardwick to the Lawrence Co. Tourism Board

*  Motion by John J. Lemaster , second by Morris Howard to approve Resolution to Apply for KCHS funds for fire depts.

*  Motion by John J. Lemaster, second by Rick Blackburn to approve truck lease with Worldwide Equipment so the County can haul its own gravel.

Two motions were tabled for a later discussion.

The bids on the Blaine Fire Dept. Surplus were rejected as they were too low.

The issue of returning funds to the East Park (FIVCO industrial park project in Greenup Co. that supposed to include Lawrence Co.) for revenue to keep the park open was tabled until the County Attorney and Court have questions they have answered.

“I didn’t think it was addressed properly,” Co. Atty. Mike Hogan said. “I don’t see the benefit of the project. I would like to see a profit/loss statement for East Park for the last 5 years. I would like to look at the finances of the park. “