Louisa, Ky. — Lawrence Co. Junior Hannah Rucker hit a three pointer with 41 seconds left to give the Lady Dawgs a lead they would not relinquish in a 46-41 upset victory over Belfry in the first round of the 60th District Tournament on Monday night at Lawrence Co. High school. 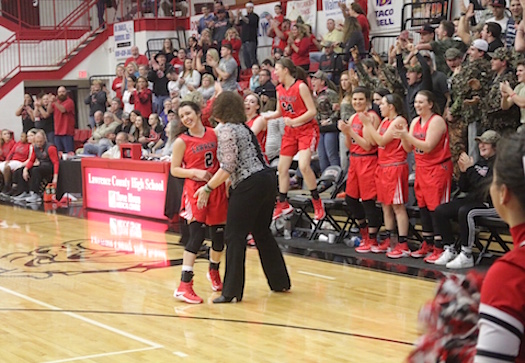 Lawrence Co. (10 – 20) the #4 seed avenged two double digit losses to #1 seed Belfry (15-14) in the regular season and knocked off the four time District champion Lady Pirates in the process.

Coaches say The Lady Dawgs are playing their best basketball of the season after snapping a ten game losing streak last week and have now won three in a row and will play in the 15th Region for the third straight season.

Belfry led 9-8 after one quarter and 19-17 at Halftime. Lexie Ratliff hit two free throws with no time on the clock to end the third period and give Lawrence Co. a 30-28 lead.

The Lady Dawgs led 39-34 before Belfry tied it at 41 and then Rucker hit the biggest shot of her career to seal it. 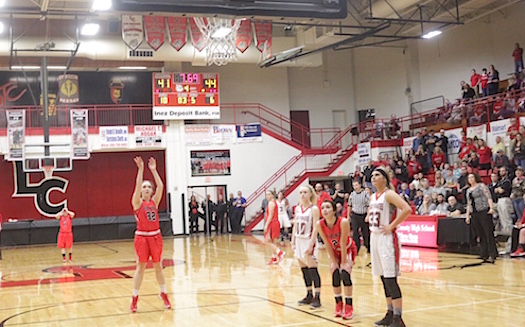 Ratliff and Rucker finished with 15 apiece to pace the Bulldogs in scoring, Kelly Davis tallied 9 points, Kylie Maynard had 3 points, Chelsey Fields and Kassidy Cavins chipped in with 2 points each. LC made 15-22 from the line and hit 3 three pointers in the win.

Lawrence Co. will play the winner of Wednesday night’s game between Pike Central/Phelps on Friday night at 6:30 for the 60th District championship at the Dawg House.

“… We struggled all year, bad passes, bad shot selection and bad decisions but the last two weeks of the season the girls have really come together and started to figure out what can help us be successful.

“…We knew the win on the road at Sheldon Clark that gave us momentum to win this game tonight.” Tonight we really tried to limit the three point shot and try and keep Harrison in front of us, Kylie Maynard did an amazing job and I couldn’t be more proud.”

“…I told Hannah and Lexie that great players step up in big games and the opportunity would come and it did late in the game… so proud of both girls.” I haven’t jumped that high in a long time.”

“… Everyone doubted us coming into this game but I told them it’s hard to beat a team three times in one year so we knew it was going to be a battle.” …No hesitation when I got it I was due and I just let it fly they gave me space on the left side which is my favorite, and I knew it was going in.” …Playing our best basketball of the season right night now the win at Sheldon Clark was the key.”