Fort Gay, W. Va. — In the first round of the Region 4 Section 2 girls basketball tournament it was the Tolsia Rebels ( 13-10 ) routing rival Tug Valley for the third time this season this time 69-32 at Rebel Arena on Friday night to kickoff postseason play.

The Lady Rebels scored the first seventeen points of the game and never looked back to advance to the semifinals. Tolsia led 23-6 after one period and 48-16 at halftime.

In the second half everyone in uniform for Tolsia got to see action and 10 ladies hit the scoring column as the Lady Rebels cruised to victory.

Tolsia Junior Mariah Finley coming off a triple double at Logan backs that up with a 11 point and 11 assists effort vs Tug Valley in the first round of tournament play Friday night.

Kayla Jude 5 points and 6 boards, Genisis Ramirez had 3 points, Trinity Muncy had 1 point to round out the scoring. Keyla Fox, Taylor Ball, Lyndsie Wilson and Jasmine Blackburn all played but did not score. Tolsia hit 3 three pointers and went 6-15 from the line.

For Tug Valley who finishes the season. Emily Colegrove led the way with 12 points, Kelli Kirk had 6 points, Abigail Spence had 5 points, Bekah White had 4 points and Hali Wilson had 3 points. 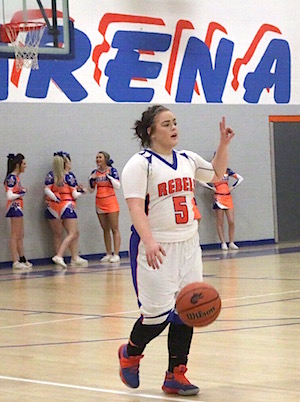 On Wednesday the Lady Rebels traveled to Logan to finish out regular season play and won an absolute thriller in double overtime 62-57.

Mariah Finley had a triple double with 21 points, 10 rebounds and 10 assists. Taylor Parsley had a double double with 18 points and 11 boards, Sarah Jude tallied 11 points, Tasha Nichols and Allysa Cloud had 6 points each.

#2 Tolsia will host #3 Sherman on Tuesday night at 7:00 in the semifinals at Rebel Arena. The Lady Rebels beat Sherman on the road earlier this season.

“… Everybody came out healthy and we really wanted to match the intensity of our previous game at Logan and I think we did that. Was kinda worried if we would have any legs left after playing that double overtime game Wednesday night. Really proud of the girls tonight.

“…They get along well on and off the court the juniors and seniors have really taken the younger players under their wings and it shows on the court.”

“…Going to be a tough matchup on Tuesday night but we have earned the right to host. Sherman has two really nice players and has some good size as well. We played them early on the road and got a win. Hopefully Rebel Arena is packed with the winner moving on to regionals.”