‘I am grateful for President Trump’s support, and I look forward to continuing to work with him to protect coal families and communities’ 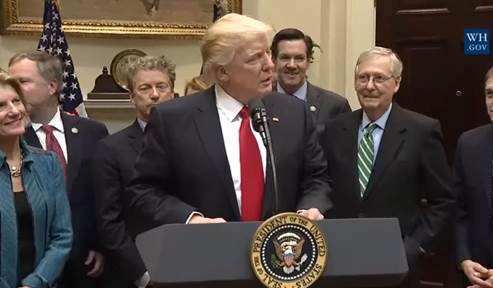 WASHINGTON D.C. — Today, President Donald Trump signed a measure, championed by Senate Majority Leader Mitch McConnell (R-KY) in the Senate, to overturn the “stream buffer rule,” an anti-coal regulation that President Obama filed in the final days of his term.

Senator McConnell was joined by Senator Shelley Moore Capito (R-WV) and 28 of their colleagues in filing the resolution of disapproval under the Congressional Review Act (CRA) in the Senate. The companion resolution, which was first passed by the House, passed the Senate with bipartisan support on February 2, 2017.

Senator McConnell said, “The Obama Administration’s Stream Buffer rule was an attack against coal miners and their families. In my home state of Kentucky, the Stream Buffer Rule would have threatened coal jobs and caused major damage to communities. The legislation the President signed today will stop this disastrous rule and bring relief to coal miners and their families. I am grateful for President Trump’s support, and I look forward to continuing to work with him to protect coal families and communities.”

Providing relief from this regulation — and the many others that have targeted coal workers – has long been a top priority for Senator McConnell and one of the goals he outlined in a letter to President Trump earlier this year.