DAWGS CLOSE OUT REGULAR SEASON PLAY WITH A WIN

Louisa, Ky. —  After a blowout loss on Tuesday night Lawrence Co.(19-11) finished the regular season with a comeback victory over a very good East Ridge (19-10) team 74-71 last night at the Dawg House. 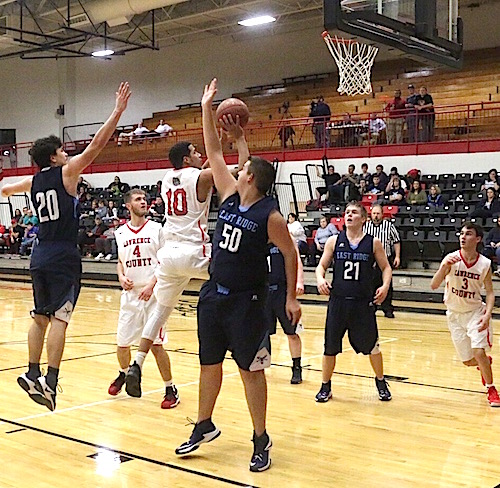 The Bulldogs trailed most of the night until taking their first lead with just under four minutes to go and held on for the win down the stretch. Big bounce back after taking one on the chin at Sheldon Clark.

East Ridge started out the game making shot after shot and Lawrence Co. weathered the storm and only trailed 22-20 after one. The warriors slowed the pace in the second period and lead 35-33 at halftime.

In the second half East Ridge led by as many as seven points but could not pull away from the Dawgs as Dalton and Wellman kept Lawrence Co. within striking distance before taking the lead with just under four minutes to go and hanging on for the victory to close out the regular season on a high note. 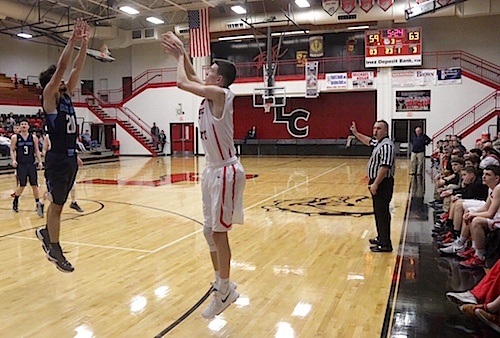 The nation’s leading scorer ( 38.0 ) Tim Dalton had 44 points and 13 rebounds to lead the way, Jared Wellman tallied 16 points and hit 4 three pointers in the second half. Junior Trey Dotson chipped in with 8 points, Tyler Maynard hit 2 three pointers for 6 points and Cameron Maynard pulled down 5 rebounds.

LC hit 9 three pointers and went 13-16 from the charity stripe.

Lawrence Co. will open up postseason play on Monday night vs Phelps at Home in the 60th District Tournament.

(We will have a preview of the tournament on Sunday or Monday so be looking for it.)

” … Picked up win number 19 and if we beat Phelps Monday that will be 20 and I’m sure a lot of folks wouldn’t have thought that was possible coming into this year.”

* …Hosting District for the first time since 2010 so it’s a special time of year right now. Hopefully we can deliver on our home floor.”

* …Tough one last night and I wasn’t sure how it would turn out. Lots of prayers and the good lord blessed us to work out the situation. I think we are primed for a good run.”

* …Coach McCoy does such a good job at East Ridge and are tough when they have the lead and we battled all night and won a tough game against a good team.”