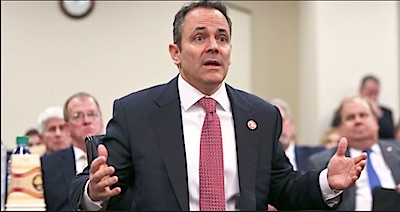 Gov. Matt Bevin testified Wednes­day in support of a bill that would re­strict some prescriptions for pain­killers to three-day supplies, saying the commonwealth has a moral obli­gation to take action to curb the opioid addictions afflicting Kentuckians.

“We’ve got to make it harder to get addicted,” Bevin told state lawmak­ers.

He questioned why people in America are given large volumes of highly addictive drugs to take home and said House Bill 333 can help ad­dress that problem in Kentucky.

Bevin encouraged the members of the state House of Representatives’ judiciary committee, which approved the bill Wednesday, to move beyond paying “lip service” to the opioid cri­sis that cripples Kentucky and the U.S. and take definitive action.

“It’s a huge problem nationally. It’s a bigger problem for Kentucky,” Bevin told reporters Wednesday before he testified. “For me to not take leadership I think would be an abdication of not only my responsibility but the opportunity that I have as governor to make sure that this is elevated to a level of discussion that it deserves.”

House Bill 333 would prohibit medical professionals from giving patients prescriptions for more than a three-day supply of a Schedule II controlled substance — such as narcotics like OxyContin and Dilaudid — to treat pain as an acute medical condition.

The legislation includes several exceptions to its proposed three-day rule, which will preserve prescribers’ ability to make professional judgments on a case-by-case basis, according to its sponsor, Republican Rep. Kimberly Poore Moser of Taylor Mill. Doctors who determine it’s medically necessary to give a patient a larger supply of a restricted drug could do so as long as they provide justification for that deand cision. And Schedule II drugs could be prescribed for more than three days to treat chronic or cancer-related pain as well as for patients in hospice care.

“The goal is to reduce the potential for addiction,” Moser said. “This is not telling providers that they can’t prescribe more than three days.”

This bill will bring Kentucky in line with federal guidelines for opioid prescriptions, Moser said. It also would help ensure that hempderived cannabidiol products, such as oil used to treat epilepsy, could be prescribed legally in Kentucky if it is approved by the U.S. Food Drug Administration.

The legislation includes other provisions that would toughen trafficking penalties for fentanyl, which can be mixed in with the heroin people buy off the street and has been linked to many fatal overdoses in Kentucky. A bill that passed in the state Senate this week also targets fentanyl trafficking.

House Bill 333 now heads to the House floor for a vote.

By Morgan Watkins
The Courier-Journal