The four Lawrence Co. defendants charged in a federal indictment with conspiring to distribute Oxycodone pills appear to have entered guilty pleas in a United States Federal Court.

On documents signed on February 10th, Heather and Glen Fluty along with Jasmin Copeland and James Simpson Jr. have all agreed to playing a part in a large drug ring that extended to Detroit Michigan. 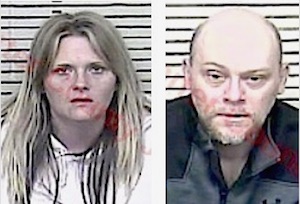 Heather Fluty will enter a guilty plea to count one of the indictment, charging a violation of conspiring to distribute Oxycodone pills. Pursuant to rule 11, the United States will move at sentencing to dismiss Count 2 through 10. The Essential Elements of count 1 are:

(A) First that two or more persons conspired or agreed to distribute a quantity of pills containing oxycodone, a Schedule II controlled substance and (B) 2. that the defendant joined the conspiracy knowingly and voluntarily. 3. As to count one, the United States could prove the following facts that established the Essential Elements of the offense Beyond A Reasonable Doubt, and the defendant admits these facts:

On October 29th 2015 the defendant Heather S Flutie, had a consensual interview with a detective with the Lawrence County Kentucky Sheriff’s Department. Flutie was Miranized during the interview. After receiving Her Miranda warnings, Fluty admitted to Distributing 7 to 10 Oxycodone pills a day for approximately one year.

In December 2015, a confidential informant working for the Kentucky State Police begin purchasing Oxycodone pills from the defendant, Heather fluty and her husband, Glenn Flutie the transactions took place at the residence Heather and Glenn Flutie shared and Lawrence County, in the eastern district of Kentucky.

After a lengthy or list of controlled buys by a confidential informant Heather Flutie agrees that she knowingly and intentionally conspired with Glenn Flutie and others to distribute Oxycodone pills. The conspiracy took place in Lawrence County the eastern district of Kentucky. The marijuana equivalency for the 126 oxycodone 30 milligram pills and the 16 15 milligram Oxycodone pills purchased and the Oxycodone pills Heather Fluty admitted 2 Distributing is 540.489 kilograms of marijuana.

The statutory punishment for count one is imprisonment for not more than 20 years, a fine of not more than 1 million dollars, and a term of supervised release of not less than three years. A mandatory special assessment of $100 applies, and the defendant will pay the assessment to the US District Court Clerk at the time of the entry of the plea.

The Co- Defendants have all agreed to similar pleas and sentencing proceedings are scheduled for Monday, June 12th, 2017 at 10:00 a.m. in Ashland, KY.