Photo taken shortly after the wall was set up 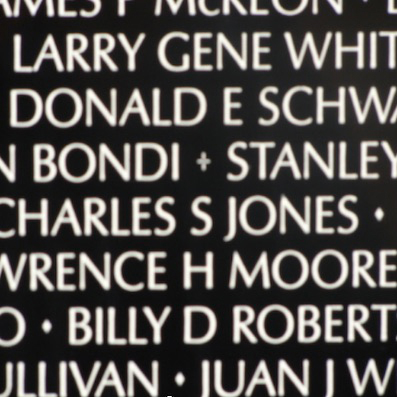 ON THE WALL – IRONTON, OH

SOME OF HIS METALS

The Moving Wall is a replica of the Vietnam Veterans National Memorial, “The Wall” is located in Washington D.C. and is taken to various cities and towns throughout the country providing Americans with an opportunity to pay homage to the more than 58,000 Vietnam Veterans who gave their lives for their country

A Tribute to Our Fallen Comrades – “Sons and Brothers, Friends and Fathers, Loved in Life, Lost In Strife, Remembered Forever.”

“The Moving Wall” is the half-size replica of the Washington, DC Vietnam Veterans Memorial and has been touring the country for almost thirty years. When John Devitt attended the 1982 dedication in Washington, he felt the positive power of “The Wall.” He vowed to share that experience with those who did not have the opportunity to go to Washington. John, Norris Shears, Gerry Haver, and other Vietnam veteran volunteers built The Moving Wall. It went on display for the first time in Tyler, Texas in October of 1984. More than one of these structures of The Moving Wall now travel the USA from April through November, spending several days at each site.

As this is being written we only know of one SOARA – ARES member who lost a relative in Vietnam. Fred Jones, WA4SWF lost his brother Charles during the Vietnam War. Hopefully, Fred will be here to see the wall with us.

Below is information from the Vietnam Wall in Washington, DC.