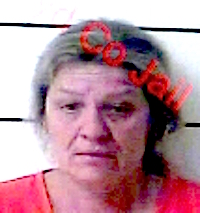 On February 11, 2017 at approximately 909 pm Troopers were conducting an approved safety checkpoint at KY 538 and KY 3294 in Boyd County.

A 2006 Dodge van, driven by Patricia D. Gore, entered the safety checkpoint and came to a stop. Mrs. Gore provided Troopers with identification and then fled from the checkpoint. A pursuit was initiated and continued across several roads and into Greenup County. As the vehicle approached US 23 Worthington Police Department deployed a tire deflation device, causing the vehicle to come to a stop on Port Road in Wurtland.

At this point Mrs. Gore exited the vehicle and fled from the scene on foot. Troopers were able to locate and arrest Mrs. Gore without further incident.

Patricia D. Gore, age 51, of Ashland, KY was arrested and lodged in the Boyd County Detention Center.
She was charged with:

Fugitive from another state

Failure to or improper signal

Failure to notify Department of Transportation of address change

No or expired registration receipt

No or expired registration plate

OVER 535 ARRESTED SINCE JANUARY 1; BSRDC 'BURSTING AT SEAMS'